You may remember a ridiculous Canadian couple that in 2011 announced they were going to stand athwart logic and human biology, and refuse to identify the gender of "Storm," their newborn child.

Kathy Witterick, 38, and David Stocker, 39, have only allowed their midwives and two older sons to peek beneath the diaper of 4-month-old Storm.

When Storm came into the world in a birthing pool on New Year's Day, they sent out this email: "We decided not to share Storm's sex for now -- a tribute to freedom and choice in place of limitation, a standup to what the world could become in Storm's lifetime."

Even Storm's brothers, 2-year-old Kio and 5-year-old Jazz, have been sworn to secrecy, as well as one close family friend. The family, while not hiding their sex of their oldest sons, also allows them to explore their gender identity. Jazz wears his hair in pigtails.

Apparently they weren't completely alone among folks in the frozen north; they have kindred spirits making decisions in the Toronto District School Board.  As Mark Steyn -- himself a victim of Canadian political correctness vigilantism -- observed September 22, 2012 at National Review Online: 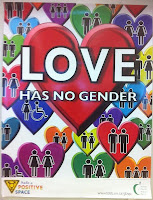 A few years ago, when the gay-marriage bandwagon got rolling, some of us argued that “if the sex of the participants is no longer relevant, why should the number be?” The same-sex-marriage crowd swatted the polygamy shtick aside as utterly irrelevant, even though there are far more takers for polygamy than there will ever be for gay marriage, and it is, de facto, already recognized to one degree or another by multiculti types in the British Government pensions department and the French welfare system.

So here we are in 2012, and the Toronto District School Board has a new poster called “Love Has No Gender", full of happy couples but also happy triples. This poster is in every Toronto grade school.


Here's how Michael Coren -- who has been referred to as the Canadian version of Bill O'Reilly -- tackled the issue with a spokesman from a pro-family group.


My few regular readers may remember my alarm when former Mouseketeer and former self-declared virgin Britney Spears went completely over the opposite end with her 2009 smash hit comeback single, "3," which was a plainly-spoken tribute to group sex.  The title of this post ("Living In Sin Is The New Thing") references the lyrics of the song, which also included:

1, 2, 3
Not only you and me
Got one eighty degrees
And I'm caught in between

I've seen a lot of changes in my life, which spans five decades.  But I never thought I'd see the day when parents so blithely leave child-raising decisions to public school bureaucrats.  It's not as bad in America as it is in Canada yet, but there doesn't seem to be a significant number of people who are standing up to say, "Enough's enough!"
Posted by L.N. Smithee at 9/26/2012 02:37:00 PM No comments:


KPIX-TV (San Francisco) anchor-reporter Ken Bastida, in a live remote at AT&T Park with the Petaluma, CA Little League team that finished 3rd in the 2012 Little League World Series, quizzed 12-year-old pitcher/first baseman Daniel Marzo about how the local girls are reacting to his newfound celebrity.

He concluded the interview by inviting the presumably pubescent ballplayer to have a beer with him, to which Marzo replied, "Sounds good!"  It's clear that Bastida was joking, but his colleagues in the KPIX studio didn't risk letting his words float out without registering their disapproval.  Allen Martin said be heard saying "No, Ken, we're not going to allow that," followed up by his mumbling "Contributing to the delinquency..."

It reminded me of the then-controversial 1976 hit movie "The Bad News Bears," starring Walter Matthau as Morris Buttermaker, an alcoholic former minor league pitcher who keeps his one foot out of the grave in the baseball world by coaching a hapless group of youngsters.  SPOILER ALERT: After the Bears narrowly lose the league championship game, Buttermaker dips into his ever-present cooler and tosses bottles of beer to the kids, some of whom partake, although most just poured it on their teammates.
Posted by L.N. Smithee at 9/21/2012 07:17:00 PM No comments:

NOT MAKING IT UP: ONE DAY TEACHING IN AN ILLINOIS CLASSROOM GARNERED LIFETIME_PENSION FOR TWO TEACHERS' UNION LOBBYISTS

This is everything anyone needs to know to comprehend the power teachers' unions have in Illinois.


The full story is in this Chicago Tribune report.