"WHY NOT A NATIONAL HOLIDAY FOR CESAR CHAVEZ?" HERE'S WHY NOT.

Today is Monday, March 31, 2014.  In 2013, March 31 was also Easter Sunday, arguably the holiest day of the year for most practicing Christians.  So when people fitting that description visited Google that day, they were surprised and pleased to see that contrary to the web behemoth's reputation of being anti-everything religiously Christian, a serene, Christlike figure was gracing its home page.  After all, the only previous note Google took of Easter Sunday was in 2000, when it presented its iconic logo with two decorated eggs for the "oo."

Upon a second glance, however, it was clear the saintly, white-clad person Google featured on the day designated to celebrate Christ's rising was not Christ. It was Mexican-American labor activist Cesar Chavez (d. 1993), honored on the 86th anniversary of his birth on March 31, 1927.

On the official Google Doodles page, this is how the portrait (as opposed to animated, more playful past doodles) was described (bold mine):

At times the simplest answer is the best answer. Early, more complicated compositions struggling to encapsulate the magnitude of Chavez’s contributions fell away to a simple portrait, hoping to provide a serene tribute to one of the great progressive figures of our time.


Google chose not to mention the fact that it was also Easter Sunday.  To many people, it seemed as if it was a conscious decision by Google to choose Chavez over Christ, since Chavez's birthdate and Easter Sunday would not intersect again until 2024. If the Doodle people at the Googleplex wanted to avoid controversy it had to know was coming (Google didn't get to be what it is because stupid people are running it), it could have waited until today, Monday, March 31, 2014, with Easter three Sundays into April. What was the rush? It is not as if Chavez was going to be more deceased this year than he was last year.

Here in California, I wanted to visit a state building today and was surprised to find it locked and nobody inside. Chavez's birthday is a state holiday. Government agencies are closed. It had totally slipped my mind that this was passed in California's Democrat-dominated legislature and signed by Governor Moonbeam.  But if some people have their way, none of us will forget Chavez's birthday.

Judi Gerber, who describes herself as "a University of California Master Gardener with a certificate in Horticultural Therapy," wrote a piece that popped up in my news links today called "Why Cesar Chavez Deserves a National Holiday." It read, in part (bold mine):

President Barack Obama has signed a proclamation declaring March 31st as Cesar Chavez Day in the United States to “observe this day with appropriate service, community, and educational programs to honor Cesar Chavez’s enduring legacy.” I would argue that we need to go even further and, once and for all, declare it a federal holiday. For that to happen, Congress has to pass the resolution recognizing it as a national holiday. 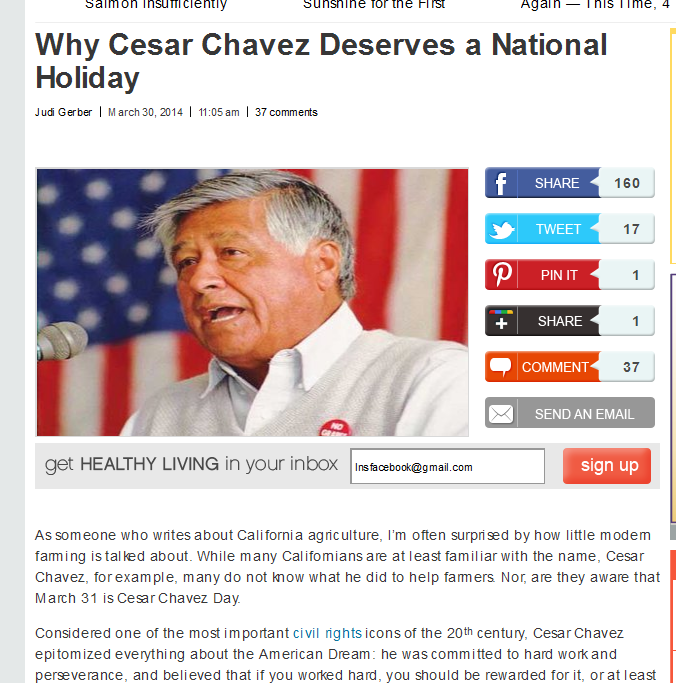 The proclamation explains the important role Cesar Chavez played in helping farm workers: “They were exposed to dangerous pesticides and denied the most basic protections, including minimum wages, health care, and access to drinking water. Cesar Chavez devoted his life to correcting these injustices, to reminding us that every job has dignity, every life has value, and everyone — no matter who you are, what you look like, or where you come from — should have the chance to get ahead.”

Further, his cause, the rights of immigrant laborers is still relevant today, even more so in many states. The declaration of Cesar Chavez Day, along with the release of the feature film from actor and filmmaker Diego Luna about his life, simply titled Cesar Chavez, which is now playing, will hopefully do a lot to make his work and legacy as recognizable as that of Dr. Martin Luther King Jr.

His family is also calling on President Obama to make Cesar Chavez’s March 31 birthday a National Day of Service. It seems only fitting to take action, because as Chavez once responded: “If you want to remember me, organize!”


Until the elevation of Martin Luther King Jr.'s birthday to federal holiday status in 1983 (signed into law by President Ronald Reagan), there were only two persons whose birthdays were recognized as deserving of such observation: George Washington, the first President of the United States, and a guy named Jesus Christ. I personally don't believe a King holiday was appropriate for national status because I don't believe that King was more deserving than Abraham Lincoln, whose birthday NEVER was a national holiday. (At this point, let me interject that I am a black man - twice as black as Barack Obama.)

But, now that for all intents and purposes, Rev. King's existence has been elevated to the status of perhaps the third most important person in the centuries since the pilgrims first arrived at Plymouth Rock, every multi-culti "social justice" type is whipping up a campaign to force everyone to acknowledge her or his own secular patron saint. Chavez, commonly spoken of as the Latino-American version of King, is the next logical activist up at bat; then, we'll likely have some drive to create a holiday in honor of a great American woman, maybe Susan B. Anthony. Then, get ready for the campaign to give everyone in government a day off to reflect on the greatness of gay rights martyr Harvey Milk (don't laugh, that nonsense is already underway in California). Of the four figures whose faces are carved on Mount Rushmore, only Washington has his own holiday. Move over, Abe, Tommy, and Teddy, here comes Harv.

Am I implying that Cesar Chavez was some sort of villain? Of course not. The bottom line is this: There are only as many as 366 days in a calendar year; we can't honor the lives of every significant American unless we want to close D.C. down forever (and NO, that wouldn't be a good idea). Billions of Americans have existed since 1776, and [only] the greatest of the great ones are [more than] brief mentions or mere footnotes in contemporary history books; many great ones are anonymous and have been lost to future generations altogether. It's short-sighted -- and frankly ridiculous -- to suggest that anyone whose activities were not integral to the formation and/or survival of the United States of America ought to be honored in the same manner as those whose lives match that description beyond any shadow of doubt.

To any rational person, Chavez falls well short of that standard.