The following is my reaction to the U.S. Patent and Trademark Office's ruling that the Washington Redskins' long-established logos and trademarks should not have federal registration that helps them legally protect counterfeiting of their merchandise, as posted at Patterico.com [and amended or corrected with brackets]:


Federal trademark law does not permit registration of trademarks that “may disparage” individuals or groups or “bring them into contempt or disrepute.” The ruling pertains to six different trademarks associated with the team, each containing the word “Redskin.” 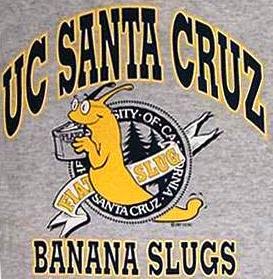 Who said that the name "Redskins" "bring[s Native Americans] into contempt or disrepute? I contend that in the cases of all but a handful of team names, the purpose is NOT to adopt a name or a mascot that has as its goal making the team seem weak or silly, but one that inspires determination, strength, even fear. In the case of the Washington Redskins, the intent was certainly not to demean natives, but to honor them in the same way as did the owners of the first patch of grass the team played upon: The Boston Braves, later known as the Milwaukee Braves, and now known as the Atlanta Braves.

In the early days of the NFL -- back when baseball really was "America's pastime" -- pro football teams were the stepchildren of the Major League Baseball teams that hosted their games.

From the New York Giants history webpage (italics mine):


WHY GIANTS? HOW THE NEW YORK FOOTBALL GIANTS GOT ITS NAME

[Original Giants'] Owner Tim Mara “borrowed” the Giants’ name from the city’s Major League Baseball team of the same name. This was not unusual among early day pro football franchises. At one time or another there were NFL franchises named the New York Yankees, Brooklyn Dodgers, Cleveland Indians, Cincinnati Reds, and Detroit Tigers.

Such was the case with the then-Boston Braves football team, who played at the National 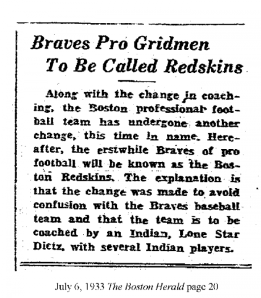 League Boston Braves' Field in Boston. So where did "Redskins" come from? When the football Braves moved out of the baseball Braves' stadium to the stadium built by the Boston Red Sox of the rival American League -- Fenway Park. They couldn't use the Braves' name while playing in the Red Sox's park, so they changed the name of the team from "Boston Braves" to "Boston Redskins" [which also could have been inspired by the phonetic similarities of "Red Sox" and "Redskins."] The team retained the nickname when they moved to D.C.

It's that simple. No "contempt." Zero "disrepute." There was no purpose in the switch from "Braves" to "Redskins" of reminiscing about the days when there were bounties put on the severed scalps of natives, or any other story that the detractors are using to ply their arguments.

Speaking of which: In answer to the earlier question of who said "Redskins" brings anyone into contempt or disrepute, the answer is five activist Native Americans who filed the complaint with the Patent and Trademark Office. But they are representative of the majority of the people they claim to represent, aren't they? In 2004, the Annenberg Public Policy Center (yes, from Walter Annenberg, the guy behind FactCheck.org and who was responsible for putting Barack Obama and Bill Ayers in charge of a Chicago education reform project) published their election-year survey of Native Americans asking this question (verbatim):


“The professional football team in Washington calls itself the Washington Redskins. As a Native American, do you find that name offensive or doesn’t it bother you?”

As it turned out, the answer from the Native Americans was crystal-clear. A whopping 91% said that "Redskins" was offensive.

WHOOPS! Check that -- 91% said that the "Redskins" was NOT offensive.

Let me repeat that for emphasis: NINETY-ONE PERCENT OF NATIVE AMERICANS SURVEYED SAID THAT "WASHINGTON REDSKINS" WAS NOT, NOT, NOT OFFENSIVE TO THEM! With a margin of error of 2%, only 9 percent of the respondents were bothered by it.

Oh, but it must have been some white conservative guy who was in charge of that survey, right? Well, you've got the white part right. See if this name rings a bell: Adam Clymer, listed in the press release as the "political director" of the survey. If you used to frequent Free Republic as I did in the late nineties, you know who he is: He's the former New York Times reporter that then-candidate Governor George W. Bush referenced in an unfortunate "open-mic" moment.


Maybe one of the reasons why Bush was so moved to that description is because he (or his father) was the victim of Clymer's "Major League" hackery, which in later years produced this aromatic nugget about Ted Kennedy:


[His] achievements as a Senator have towered over his time, changing the lives of far more Americans than remember the name Mary Jo Kopechne..."

Even though he presided over the survey, Clymer has recently been dismissing it as irrelevant. Here he is quoted in a March 10, 2013 column by Washed-up Post sports scribe Mike Wise:


"Look, let’s suppose my numbers were 100 percent right, that 90 percent of American Indians were okay with it and that the people on the other end of the phone were actually what they said they were,” he said. “Given that, what if you had a dinner party and you invited 10 people. And by the end of the night it’s pretty clear that nine of them have had a tremendous time and really enjoyed the food and company. But one of them you managed to completely insult and demean, to the point where people around them noticed and it was uncomfortable. So, ask yourself: Were you a social success that night?”

That is a lame, silly simile, since this is not a matter of whether everybody had a great time at a dinner party. It ultimately is about whether or not an extreme minority opinion about a trademark is sufficient to make it a priority of the President of the United States to create a First Amendment crisis out of whole cloth.

This raises another question for Clymer: If it doesn't matter what the results of the survey were, why the hell did you bother conducting it in the first place? Seems to me that you invested eleven months (October 2003 - September 2004) in the hopes that your pre-conceived notions of tribal outrage would be confirmed, perhaps making it suitable for a divisive campaign issue.When it wasn't, you pretended it was meaningless that your point-of-view came up the loser.

Lucky for you, Clymer, you have a fellow "major-leaguer" in the White House, who doesn't care what the facts are. Screw the First Amendment. He's got a pen, and he's got a phone, and he's going to what he wants on his own. And from your remarks about Kennedy, we know you don't mind if a few rules are broken on the way to policy changes you desire.