GLORIA STEINEM, HYPOCRITE:
The 1998 Op-Ed Neither The Uber-Feminist Or the New York Times
Wants You To Read

What you see to your left  (click to enlarge) is a 17-year-old screencap of what was -- until now -- the only place on the World Wide Web where you could see for yourself a crass op-ed piece that legendary '70s feminist leader Gloria Steinem wrote for the New York Times on March 22, 1998. It is, as I type, still up on the Edequity On Line (sic) newsgroup (this was before the age of the modern blog).

In the wake of still-fresh allegations against then-President Bill Clinton by former secretary Paula Jones and former Clinton campaign volunteer Kathleen Willey, Steinem stated her (supposedly) sincere belief that women in the workplace should have to endure one "sexual pass" from a male superior before they can call it "sexual harassment."

In so stating, she drew the line of demarcation for male bosses at grabbing, kissing, and groping a grieving widow seeking an opportunity to do more work to pay off her late husband's debts, and inviting a secretary to sit beside him, stroke her leg, and drop his pants to reveal an erection that he invited her to kiss. Here's a preview of Steinem's reasoning:

"...[E]ven if the allegations are true, the President is not guilty of sexual harassment. He is accused of having made a gross, dumb and reckless pass at a supporter during a low point in her life. She pushed him away, she said, and it never happened again. In other words, President Clinton took "no" for an answer...


That's right, ladies -- according to no less an authority than Gloria Steinem, your boss -- be he your office manager in his tiny start-up or, say, The President of the United States of America -- he has the legal right to do all of that before you can legally and credibly say you're being sexually harassed -- as long as he takes "No" for an answer the first time.  And Steinem said so out loud, in public, and in the pages of the most respected daily newspaper in the country.

However, either the Times or Steinem herself (or both) don't want you to remember that Steinem wrote it, because in its online archives -- which are searchable going back to the 19th century -- it cannot be found.

What can be found in the archives is a letter to the Times' editors in response to Steinem's piece, penned by William S. Frago of Lake Forest, Ill. (click to enlarge): 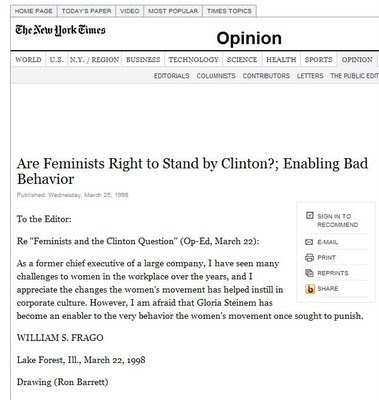 Here is the editorial, complete and unedited.

HEADLINE: Feminists and the Clinton Question

BODY:
If all the sexual allegations now swirling around the White House turn out to be true, President Clinton may be a candidate for sex addiction therapy. But feminists will still have been right to resist pressure by the right wing and the media to call for his resignation or impeachment. The pressure came from another case of the double standard.

For one thing, if the President had behaved with comparable insensitivity toward environmentalists, and at the same time remained their most crucial champion and bulwark against an anti-environmental Congress, would they be expected to desert him? I don't think so. If President Clinton were as vital to preserving freedom of speech as he is to preserving reproductive freedom, would journalists be condemned as "inconsistent" for refusing to suggest he resign? Forget it.

For another, there was and is a difference between the accusations against Mr. Clinton and those against Bob Packwood and Clarence Thomas, between the experiences reported by Kathleen Willey and Anita Hill. Commentators might stop puzzling over the President's favorable poll ratings, especially among women, if they understood the common-sense guideline to sexual behavior that came out of the women's movement 30 years ago: no means no; yes means yes.

It's the basis of sexual harassment law. It also explains why the media's obsession with sex qua sex is offensive to some, titillating to many and beside the point to almost everybody. Like most feminists, most Americans become concerned about sexual behavior when someone's will has been violated; that is, when "no" hasn't been accepted as an answer.

Let's look at what seem to be the most damaging allegations, those made by Kathleen Willey. Not only was she Mr. Clinton's political supporter, but she is also old enough to be Monica Lewinsky's mother, a better media spokeswoman for herself than Paula Jones, and a survivor of family tragedy, struggling to pay her dead husband's debts.

If any of the other women had tried to sell their stories to a celebrity tell-all book publisher, as Ms. Willey did, you might be even more skeptical about their motives. But with her, you think, "Well, she needs the money." For the sake of argument here, I'm also believing all the women, at least until we know more. I noticed that CNN polls taken right after Ms. Willey's interview on "60 Minutes" showed that more Americans believed her than President Clinton.

Nonetheless, the President's approval ratings have remained high. Why? The truth is that even if the allegations are true, the President is not guilty of sexual harassment. He is accused of having made a gross, dumb and reckless pass at a supporter during a low point in her life. She pushed him away, she said, and it never happened again. In other words, President Clinton took "no" for an answer.

In her original story, Paula Jones essentially said the same thing. She went to then-Governor Clinton's hotel room, where she said he asked her to perform oral sex and even dropped his trousers. She refused, and even she claims that he said something like, "Well, I don't want to make you do anything you don't want to do."

Her lawyers now allege that as a result of the incident Ms. Jones described, she was slighted in her job as a state clerical employee and even suffered long-lasting psychological damage. But there appears to be little evidence to support those accusations. As with the allegations in Ms. Willey's case, Mr. Clinton seems to have made a clumsy sexual pass, then accepted rejection.

This is very different from the cases of Clarence Thomas and Bob Packwood. According to Anita Hill and a number of Mr. Packwood's former employees, the offensive behavior was repeated for years, despite constant "no's." It also occurred in the regular workplace of these women, where it could not be avoided.

The women who worked for Mr. Packwood described a man who groped and lunged at them. Ms. Hill accused Clarence Thomas of regularly and graphically describing sexual practices and pornography. In both cases, the women said they had to go to work every day, never knowing what sexual humiliation would await them -- just the kind of "hostile environment" that sexual harassment law was intended to reduce.

As reported, Monica Lewinsky's case illustrates the rest of the equation: "Yes means yes." Whatever it was, her relationship with President Clinton has never been called unwelcome, coerced or other than something she sought. The power imbalance between them increased the index of suspicion, but there is no evidence to suggest that Ms. Lewinsky's will was violated; quite the contrary.

In fact, her subpoena in the Paula Jones case should have been quashed. Welcome sexual behavior is about as relevant to sexual harassment as borrowing a car is to stealing one.

The real violators of Ms. Lewinsky's will were Linda Tripp, who taped their talks, the F.B.I. agents who questioned her without a lawyer and Kenneth Starr, the independent prosecutor who seems intent on tailoring the former intern's testimony.

What if President Clinton lied under oath about some or all of the above? According to polls, many Americans assume he did. There seems to be sympathy for keeping private sexual behavior private. Perhaps we have a responsibility to make it O.K. for politicians to tell the truth -- providing they are respectful of "no means no; yes means yes" -- and still be able to enter high office, including the Presidency.

Until then, we will disqualify energy and talent the country needs -- as we are doing right now.