QUESTION FOR ZIMMERMAN TRIAL WATCHERS: WHAT IF SHANE_HAD TAKEN PLACE IN FLORIDA?


Watch the video below. If you're familiar with director George Stevens' 1952 classic film Shane, you know what it's about. If you haven't seen Shane, take a look, and pay close attention.

The legend of Shane is set in a valley in late 19th Century Wyoming where, as the story goes, the closest law enforcement was three days' travel away.  However, I'd like to know your answer to this hypothetical question:
What if the laws of current-day Florida were in place in Shane?

I'm not kidding. If what you just saw had taken place in Florida, could Jack Wilson, (Jack Palance) the grinning, black-hatted shooter, be convicted of a crime? Or was he simply defending his own life against hot-tempered so-called sodbuster Frank "Stonewall" Torrey (Elisha Cook, Jr.), who clearly drew a gun on him in front of plenty of witnesses?

I want to know what you think. I've got Disqus on my blog now, so it's easy to comment. Knock yourself out.

By the way, Shane is well worth watching if you've never seen it. It's not #45 on the American Film Institute's list of 100 Classic American Movies for nothing. You can see it on Amazon or Netflix, and the Blu-ray is being released in August 2013.

You know who Hank Johnson is, don't you?

What if I told you he has to be the least intelligent member of Congress currently in office, bar none? Would that help you?

What's that? You say he can't be as dumb as that guy who expressed his concerns to a Navy Commander about putting a Marine base on the South Pacific island of Guam because it might cause the island to capsize?

That was Hank Johnson!


Here's a portion of the transcript of his comments in the video; the hearing's transcripts can be found here (Johnson's questions to U.S. Pacific Commander Adm. Robert Willard, U.S. Navy begin on page 26). 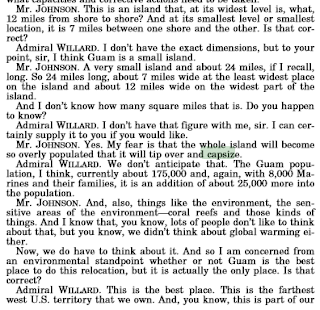 When the video of Johnson's "capsize" comments went viral, he claimed that he was using humor to make a larger point about the potential damage a new military base could cause to Guam's infrastructure and environment.

Let's talk about that.

It's true that Johnson did voice those concerns, but his unsteady inquiries about the length and width of the island (although, shockingly, he couldn't get the words "length" and "width" out of his mouth) indicate to me he had in mind that the adding a naval base to the island might tip it over much like an unbalanced canoe would.  Hank should have no such fears; an additional 25,000 more residents shouldn't put Guam at risk of sinking under the weight of approximately 200,000 residents. After all, there is an island property of the United States that does just fine with one-ninth the acreage of Guam and 1,600,000 residents. What's the name of that island again?  It seems to have slipped my mind.

Oh, I remember. It's called "Manhattan."

Now, that's comedy ... kind of. I'm no comedian, but I know I'm funnier than Hank Johnson for the simple fact that I know this: If you're the only one who gets it, you're not doing it right.  Good humor may at times be complex, but it's never so obscure that people have no idea what is being talked about.  Funny people learn this at a young age.  As we get older, the stakes get higher. When a mature adult flubs at telling a riddle much like kindergarten kids often do, it's not cute.  It's embarrassing at the least, and at the worst it's pathetic.  People wonder if you're just bad at being funny, or if you're dense.  Maybe Hank, in his own mind, thinks he's Bill Cosby or Richard Pryor. I think not. Try Stepin Fetchit. That, of course, is predicated on the notion that Johnson wasn't being dead serious.

Johnson is also on the House Judiciary Committee.  In the run-up to so-called comprehensive immigration legislation passed in the Senate with the aid of moderate Republicans of the "Gang of Eight," border hawk Trey Gowdy (R-SC) proposed the "SAFE Act," a bill that authorizes and funds the enforcement of federal immigration statutes by state and local governments.  On June 13, 2013, hearings were held regarding the bill.

You're about to watch one reason why I don't give Hank Johnson the benefit of the doubt when he offers explanations for appearing to be totally clueless. 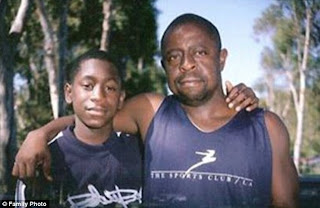 Out of the nine persons seated before the HJC that day, two Californians had compelling accounts to relate. Jamiel Shaw Sr. (right, with his late son, Jamiel Jr.) testified about how local governments' refusal to deport undocumented criminals -- in this case, a young gangbanger who had just been released from jail -- led to his teenage son being murdered as he was walking home from high school. Ironically, Shaw Sr.'s wife and Jamiel Jr.'s mother was serving in Iraq at the time of his killing. She survived a war zone in the Middle East. Her son died in the war zone in his own neighborhood.  Here's a link to video of Shaw Sr.'s statement. 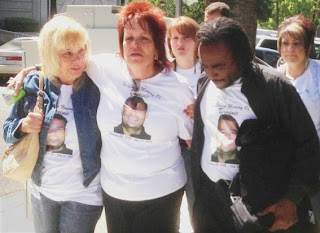 Sabine Durden (left, middle, following a court appearance) testified before the Committee about how laxity in deportation of undocumented criminals led to her adult son Dominic being killed in traffic by an illegal immigrant on probation for GTA & armed robbery and 2 DUIs. Dominic Durden was a well-respected volunteer firefighter and police dispatcher who had been recognized multiple times by government officials and politicians everybody has heard of.  Ms. Durden's statement can be seen here.

Now, watch and listen to the way Hank Johnson wasted his five minutes to question the panel, and zeroed in on Mr. Shaw and Ms. Durden.  Then, watch as Raul Labrador (R-Idaho) responded, how HJC Chair Bob Goodlatte (R-VA) intervened, and how Shaw & Durden returned fire.

Although Shaw and Durden got to say their peace, I don't think either of them believes Johnson got it or gets it.  The frustration of Durden was evident on her face as Johnson finally stopped talking. I was alerted to this situation after I heard Durden in an interview on The John and Ken Show on KFI-AM, Los Angeles. She made note of the "rude gentleman from Georgia."

I am in the Congressional District of Nancy Pelosi. She's not much sharper than a butter knife either,  but she neither has a law degree nor practiced law for a quarter-century. Apparently, Hank Johnson does and did.  I'm trying to imagine Johnson in court, and just thinking about it is excruciating. I don't know if he's had a motorcycle accident without a helmet or something, but there's nothing that has come out of that dude's mouth lately that indicates he can do anything more than read and regurgitate talking points he can barely grasp (thus the specious mumblings about the corrections industry and ALEC).

Certainly whatever sector of his brain from which compassion should originate has been rendered inoperable.
Posted by L.N. Smithee at 7/03/2013 03:44:00 PM No comments: