I live in the San Francisco Bay Area, the "bluest" metropolitan region in the United States of America. Do those of you living elsewhere think you're surrounded by Obamamania? Within the city limits, you cannot walk or drive more than half a block before you see the ubiquitous (yet brilliantly conceived) Obama campaign logo or some sort of poster, sign, or t-shirt lauding his existence or victory. People here are still in the moment that began last November, hanging on their own personal sweet love hangover.

For all of us who don't buy into the hype, it's difficult to express ourselves without sounding belligerent. This is not because we are itching for an argument about President Obama's abilities, but because that is the way every doubt about him sounds to his True Believers. Their admiration of him, devotion to him, and in some cases obsession with him usually is reserved solely for followers of religious leaders. I got sick of waiting for someone else to come up with a way to forcefully -- yet politely -- express resistance to something I have never experienced in my life: Americans treating a national leader as if he were a god.

Noting that people -- led by mainstream media figures and politicians on both sides -- are being encouraged not to question Obama's judgment (or at least, temporarily mute their concerns) on his appointees, his policies, his stated goals, and his methods of attaining them, it seemed to me the tables had turned since the '60s and '70s, when default wisdom was to distrust the government rather than rally around the President. Back then, it wasn't uncommon to see the bumper sticker reading "QUESTION AUTHORITY."

It has been a while since I've seen that sticker. The ones condemning the President have been a good deal more personally insulting the past eight years. It occurred to me that it was time for that sentiment -- which is a good idea regardless of the quality of the leader targeted -- to make a comeback.

Or should I say, me.

New, Shocking Video of BART Cop Shooting Passenger In The Back

High-profile Defense Attorney John Burris has announced he will file a $25 million dollar wrongful death lawsuit on behalf of the family of Oscar Grant, a 22-year-old Oakland man who was shot in the back by a Bay Area Rapid Transit (BART) police officer.

The deadly January 1 incident began as a fight aboard a Fremont-bound train among passengers returning from New Year's Eve revelry. When the combatants were detained by BART police after the train was stopped at the Fruitvale station, Grant was among those who was initially told to sit against a wall on the above-ground platform. Amidst indistinct shouting, Grant was then flipped over onto the ground with his face to the concrete floor. Eventually, the situation devolved to a point at which Grant was being held down by an officer with a knee in Grant's back. Finally, with one officer on Grant's left seeming to be grabbing for his hands to place behind his back, that officer holding Grant down reached for his gun, unholstered his weapon, stood over Grant, held the gun at Grant's back, and cocked it. It discharged. The other BART cops were stunned into paralysis for a moment. The officer who fired the shot held his hands away from his body in seeming disbelief at what he had done.

Now, keep in mind everything I have just described is a result of viewing video of the killing not from BART surveillance cameras, which are all over the train stations; it's from a cell phone video of a BART passenger who shot it through the window of a different car in the train. BART has insisted it has no video of the incident that shows the actual shooting, stating that all of the cameras are not connected to recorders. That is ludicrous on its face, but we will not know until later if it's a ludicrous lie or a ludicrous policy.
Posted by L.N. Smithee at 1/04/2009 05:30:00 PM No comments: 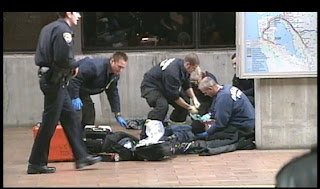 It is always my first instinct to give police the benefit of the doubt when they are accused of brutality, and especially when there is video of a repeat offender resisting arrest (remember that the three passengers in Rodney King's car did not resist, and were not beaten). This, however is different -- at least that's the way it appears now.
Posted by L.N. Smithee at 1/03/2009 11:36:00 PM No comments:

So I've been watching those commercials in which Domino's Pizza is boasting that their new "Oven-Baked Sandwiches" are preferred two-to-one over Subway sandwiches.

I'll have to try one someday to find out. But I'm not optimistic. These are the same guys who have been putting out a decidedly inferior pizza for decades. Note that Domino's has never had ads talking about how much better tasting their pies are -- they probably know that if you live in an urban area or even a college town, you could stick your finger in the Yellow Pages under "Pizza" and almost always select purely by chance a mom-and-pop joint that makes a better pizza.
Posted by L.N. Smithee at 1/02/2009 11:17:00 PM No comments:

The few, the proud, the L.N. Smithee readers.

Or, maybe I should say, me.  I can't get a free hit counter to work (the one that I had a year ago disappeared into thin air along with my "Payola Free" sign), so I don't know for sure, but I suspect that I am the only regular reader of my little space on the Weird World Web.

Technically, this blog -- created out of boredom at work in 2005 -- is entering its fourth calendar year. But it's not what I figured it would be when I began, and it probably never will be. The folks at Blogger/Google have not set as a priority making this generation of the software easily changeable, and I couldn't justify the time necessary to revamp the whole shebang the long way. I actually registered to create a free blog at a well-established, instantly recognizable conservative site, but I didn't want to see nor promote those we-dare-you-to-look ads for PETA or the mega-annoying pics of that muscle-bound bald dude who sells his own method of weight-free personal training.

Be that as it may, I still want to put more into the L.N. Smithee blog.  I find that I am sharper when I am constantly thinking about how to properly put words in print. I don't think of myself as a great writer, but there are times when I am amazed at how well I have expressed myself when I re-read what I wrote some weeks, months, or years later.  Even better is when someone writes to say that I am not a bad writer.  Probably the highest praise I have received was from notable blogger Jim Treacher, who reacted to my smacking down of a Patterico.com troll by writing "I just wanted to say I am now an L.N. Smithee fan."

Among my new year's resolutions for 2009 is my aim to blog at least once a day every day of the year, even if the topic is inconsequential. Because this has been a busy day for me, and I anticipated that I would not have the opportunity to get heavy today or tomorrow, I decided last night that my first blog would be this announcement. I have several Seinfeldian observations in reserve for tomorrow.

Hey, They Might Be Giants have written songs for every day since March 2000.  Not all of them were hits.