WILL PRESIDENT OBAMA USE BACHMANN-HATING "QUESTLOVE" FOR A "SISTER SOULJAH MOMENT"?

At 10:07 pm Eastern Standard Time on the evening of Monday, November 21, 2011, Ahmir Khalib Thompson -- better known as "Questlove," the leader of The Roots, the house band on NBC's Late Night with Jimmy Fallon -- sent out this message via Twitter: 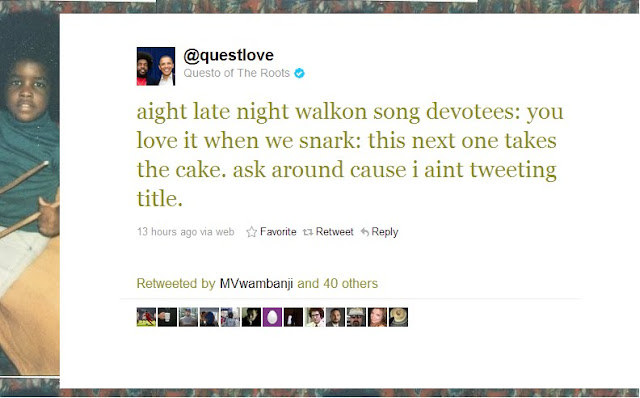 For the uninitiated, let me break it down; "walkon song" is a reference to the song that the band plays as a guest walks to the guest chairs to chat with the host. Just for the sake of example, let's say Paris Hilton is the guest. A band might choose the classic "April in Paris." Or if the guest is Sally Field, a good choice would be "Mustang Sally" by Wilson Pickett. Or if the guest is Martin Short, Randy Newman's "Short People." If the guest is Jack Black, "Back in Black," or "Jumpin' Jack Flash," or "Paint It, Black." Or if the guest is Green Bay Packers quarterback Aaron Rodgers, "Leader of the Pack."

The untitled "walkon song" Questlove was referring to in his tweet is an obscure track by the eclectic alt-rock band Fishbone that The Roots had planned for Republican Presidential candidate Michele Bachmann.  Let's go to the videotape, courtesy Media Research Center:


This is reminiscent of an even more objectionable musical serenade also done in the wee hours of the morning, on ABC's loose, chatty World News Now, a sort of training wheels national newscast for young, up-and-coming reporters (alumni include CNN/CBS's Anderson Cooper, ABC's Juju Chang, and Aaron Brown, formerly of CNN). This occurred in the wake of Ann Coulter's megagaffe of referring to then-Presidential candidate John Edwards as "a faggot" at CPAC in 2007. While the remark was outrageous, that was no excuse for what happened on what's supposed to be an objective newscast.

From Newsbusters.com; Listen to the song being played by the director as the disgusted anchors pile on Coulter, then go to a weather map and a commercial break:

President Obama was lauded for his speech at the public memorial for Loughner's victims. Here's CBS' Chip Reid, getting briefly choked up at Obama's announcement that Giffords opened her eyes, and introducing BHO's call for civility. 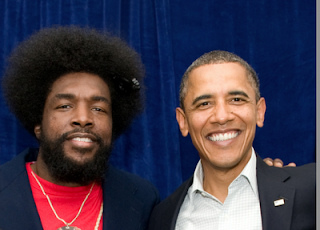 Talking the talk is easy. Walking the walk, not so much. Will Questo's homie Barack use this as a "Sister Souljah moment," and call him out for so brazenly issuing a slur to a woman for the sole reason that he disagrees with her politically?