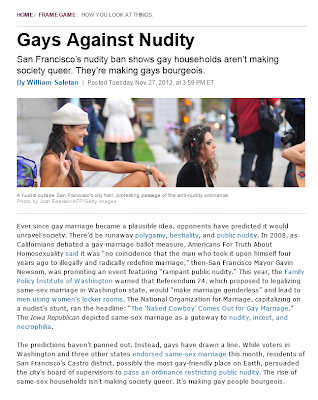 It occurred to me after writing this that it's ironic how Peoria, IL has become the go-to city when using shorthand for Middle America ("Will it play in Peoria?") when, in reality, Illinois was the first state in the union to decriminalize sodomy in 1961, a decade and a half before California did. So, in a sense, San Francisco adopted Peoria values.
Posted by L.N. Smithee at 11/28/2012 12:30:00 PM No comments: