What's a "Stopped Clock Alert"? An acknowledgement of excellence where you rarely expect to find it, in the spirit of the old adage, "Even a stopped clock is right two times a day." Today, that clock is The Daily Show's Jon Stewart, who points and laughs at the news channels obsessed with finding something scandalous in Sarah Palin's emails as Governor of Alaska (which I covered in this REACTOR post).

LAMESTREAM MEDIA LOOKS FOR SKELETONS IN SARAH PALIN'S SECRET VAULT, AND (LIKE GERALDO 25 YEARS AGO) FINDS ... NOTHING

Before we go into the past weekend's events, a brief history lesson. Hop in the DeLorean with me and let's travel 25 years into the past.

It was one of the most eagerly-anticipated broadcasts of 1986. Geraldo Rivera, America's highest-profiled investigative journalist, had recently parted ways with ABC News over a spiked story by another ABC reporter (Sylvia Chase) speculating about the relationship between Marilyn Monroe and John and Robert Kennedy.

Freed of the suits that might get in the way of a great story, Geraldo went out on his own, and found what promised to be an intriguing topic: What might be hidden in a secret chamber deep inside Chicago's Lexington Hotel, the soon-to-be demolished headquarters of America's most notorious Prohibition-era gangster, Al "Scarface" Capone?  For decades, rumors had it that within there might be a stash of hidden valuables, or even better, the remains of some of Capone's enemies.

Given exclusive access, a confident Rivera promised to reveal on an uncensored live broadcast what secrets had been lying behind those walls.  How it was promoted...


...and what actually happened when the cameras rolled, live, as Geraldo recounted on the twenty year anniversary in 2006.


The term "Epic Fail" had not been coined yet, but few incidents illustrate it better.

It was thought at the time to have doomed Geraldo's career -- it didn't.  More people watched Rivera fail that night more than any other audience had watched any syndicated program (remember, this was before the advent of the Fox TV network, so there were many more independent TV stations than exist today).  Even though the program was a crushing disappointment, it proved Geraldo's drawing power.  However, the program has joined Gertrude Stein's quote "There is no there there" as an illustration unanticipated vapidity.

Now, back to the present day and age.

Going back to September 2008 when Alaska Governor Sarah Palin was selected by John McCain to potentially serve as his vice president, the media has been clamoring for secret communication with which to hang her. They thought they had something when the college student son of a Democrat in the Tennessee Legislature gained access to Palin's Yahoo email account and uploaded everything to a hacker haven, hoping for something to exploit. 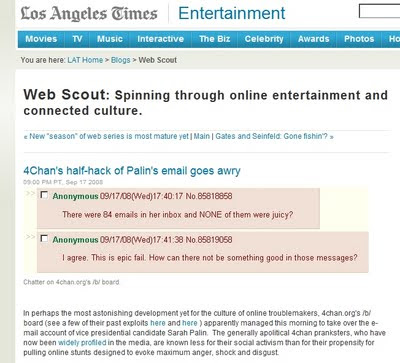 David Kernell -- son of Mike -- was sentenced to a year in prison.

But finally, on Friday, June 9, 2011, after making legal requests dating back to when they barely knew her name, the day arrived when the state of Alaska gave the MSM what it wanted: A reason to dig deep into Palin's emails as Governor.   She may have been defeated along with McCain in 2008, but she hadn't stated she wouldn't challenge President Obama for the White House in 2012; she was still a potential threat.  At every turn, the media majority have dismissed the idea that she might have been a competent leader in Alaska, choosing instead to magnify her verbal slips, her plainspoken language, and her unconventional celebrity status.  Even her own sex appeal was used as a weapon against her. The hunt was on to find whatever could be found to prove she lacked the all-important gravitas.

Because Alaska only released reams of physical copies rather than uploadable digital copies (24,000 pages), the New York Times and Washington Post called in the cavalry: Their thousands-strong reserve force of Palin-obsessed haters that emerge from the cyber universe whenever and wherever she is covered around the world.

The word went out on June 9th in the Post thusly... 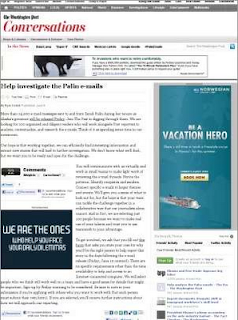 Over 24,000 e-mail messages to and from former Alaska governor Sarah Palin during her tenure as Alaska's governor will be released Friday. That's a lot of e-mail for us to review so we're looking for some help from Fix readers to analyze, contextualize, and research those e-mails right alongside Post reporters over the days following the release.

The clamor to get in on the gang ... uh, group analysis of Palin was so great, the Post expanded its invitation:


UPDATE: We have had a strong response to our crowdsourcing call-out on the Palin e-mails. We've reconsidered our approach and now would like to invite comments and annotations from any interested readers.

Here’s how to participate:Over 24,000 e-mail messages to and from Sarah Palin during her tenure as Alaska's governor will be released Friday . We’ll be posting them here, and are inviting you to comment on the most interesting or most noteworthy sections. Please include page numbers and, where possible, a direct excerpt. We'll share your comments with our reporters and may use facts or related material you suggest to annotate the documents displayed on The Post site. We may contact you for further details, by way of your registered e-mail with the Post, unless you specify otherwise in the comments.

For micro-updates as tomorrow unfolds, check out our new Twitter feed .

Michael Isikoff (who will go down in history as the man who wrote the famously spiked article about Bill Clinton's inappropriate relationship with Monica Lewinsky) was all but licking his chops in his Friday morning conversation with NBC's Ann Curry live via satellite from Juneau, AK:


Like the promo for the Al Capone's Vaults special, much excitement and amazement was anticipated.

Instead, what actually happened is what Palin predicted would happen.

Even people who don't like Palin weighed in on the attempted high-tech lynching:

So, there you are.  Unlike Geraldo, nobody like Jill Abramson of the Times, Isikoff of NBC or Dana Milbank of the Post promised a song and dance if their mission failed.  But that's OK, I have a song for them instead.


Enjoy your baked Alaskan crow, lamestreamers! Hope it's been worth the wait!