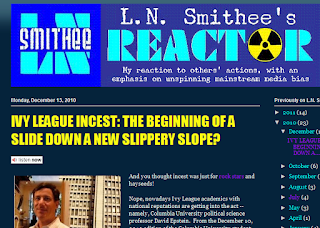 A big seventies album rock Thank You to Cornell Law Professor William Jacobson and his crew at one of my favorite blogs, Legal Insurrection, for heeding my Tweet regarding their initial choice for Video of The Day, Styx's "Come Sail Away": 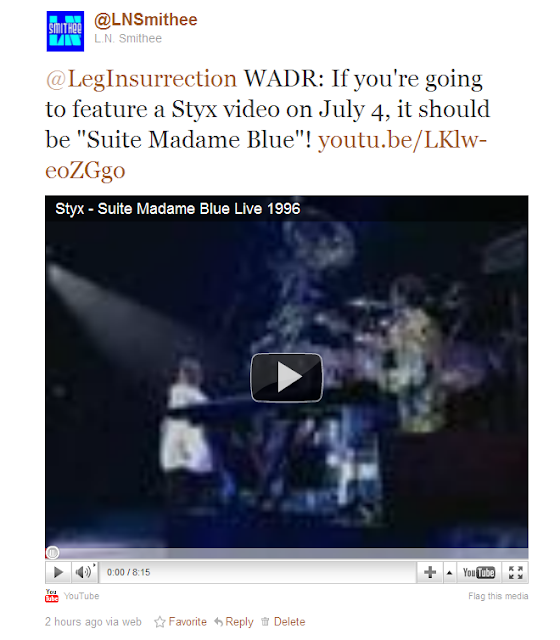 "Suite Madame Blue," from Styx's 1975 Equinox LP (that's a "record," you whippersnappers) with its pre-Photoshop album jacket with a flaming cake of ice , is a soaring six-and-a-half-minute epic cut portraying the United States of America as an aging matron who has led a full life, but whose glory days are behind her.  The closing of the song is a call for the "red, white and blue" to "lift up [its] heart, and make a new start..."  It has been said that lead vocalist/keyboardist Dennis DeYoung wrote the song in anticipation of the nation's bicentennial celebrations in 1976, which were anti-climactic in light of the open wounds of Vietnam, the resignation of Richard Nixon, and the crippling recession that eventually led to the defeat of Gerald R. Ford by Jimmy Carter, now the second-worst President of my lifetime.

Less than an hour later, I got this tweet back:

When I returned to LI, this is what I saw: In case you can't read the bottom, here it is zoomed:

Ladies and Gentlemen, live and in concert in 1996, STYX!


ALSO: In the process of researching this entry, I came across a rare YouTube video of a CBS "Bicentennial Minute" (technically titled 200 Years Ago Today), which began broadcast in 1975 after the final credits of whatever was on the network at 8:30 every evening at 8:57 pm.  The series ended with President Ford's recounting of the adoption of the Declaration of Independence on July 4, 1976.  This one, broadcast August 31, 1975, featured stage and screen veteran (and future Best Actress Oscar winner) Jessica Tandy:

I wonder if CBS would consider releasing all editions of 200 Years Ago Today on DVD -- that is, if it hasn't already lost or destroyed them.  I was a grade-schooler at the time and used to think Bicentennial Minutes were corny and an unnecessary intrusion on my entertainment time. Now, I get it. Thankfully, so did Dennis DeYoung.
Thanks again Legal Insurrection (Prof. Jacobson, Kathleen McCaffrey, Matthew Knee, Michael Alan, Katie Thompson).  YOU ROCK!
Posted by L.N. Smithee at 7/05/2011 07:32:00 AM No comments: