QUESTION: IS JIMMY KIMMEL A RACIST FOR ASKING BLACK PEOPLE ON THE STREET ABOUT R.E.M. BREAKING UP?

ANSWER: Of course he's not.

So neither is lesser-known comedian Bob Oschack a "racist" for asking Asian USC students about the expansion of the Pac-10 Conference.

GEORGE ZIMMERMAN TWEET: JESUS TOLD ME "I WOULD HAVE SHOT HIM TOO"

Not makin' it up, folks. 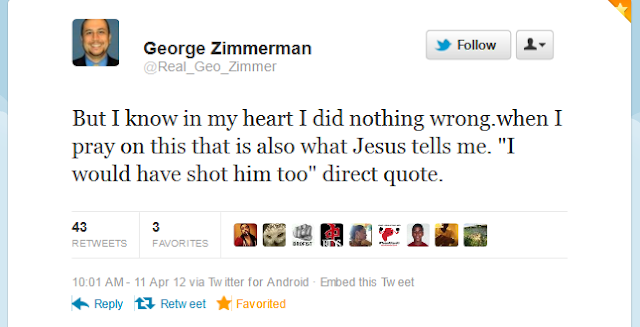 "WAY TOO COMMITTED TO STOP":
S.F. PSYCHO CYCLIST PLOWS INTO A CROSSWALK, KILLS A PEDESTRIAN ... AND MOURNS HIS BUSTED HELMET 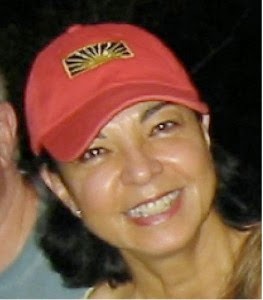 For the second time in nine months, a San Francisco pedestrian who was walking legally in a crosswalk has been mowed down by a reckless bicyclist.  And thanks to the miracle of social networks that cause people to text, tweet, and post before they think, we know that in this case, what I and others suspected were the brainworkings of too many two-wheeled terrors is the absolute truth.

The previous victim was a visitor to the city, the lovely, deceptively young-looking 68-year-old Dionette "Didi" Cherney (left) from Washington, D.C.. On July 15, 2011, she stepped off the curb to cross the Embarcadero at the same time 23-year-old Randolph Ang -- as his story goes -- was late for work at his new job.  Ang decided he couldn't (or shouldn't have to) stop for the red light that was supposed to make it safe for Cherney to go, and the back of her head smacked the unforgiving asphalt in their collision. Ang was cited and released. Cherney died almost a month later in a San Francisco hospital bed, nearly 3,000 miles away from home.

In 1992, bike riders in San Francisco pioneered the disruptive monthly protest known as "Critical Mass" in which bicyclists blitz the streets, ignore stop signs and red lights, and cut off traffic to motor vehicles. Cyclists became a potent political force in the '90s then-newly elected Mayor Willie Brown decided -- after a riotous reaction to trying to rein in Critical Mass -- it was easier to suck up to them than stop them.  Since then, the bicycle lobby has used its clout to demand more bike lanes throughout the city, and in cooperation with elements of the so-called "sustainable cities" movement, is pushing for motor vehicles to be banned in some parts of downtown.  Perhaps those facts could explain why then-S.F.Chief of Police and now-S.F. District Attorney George Gascon, who can be seen in this 2009 video riding a bicycle along with the editor of the activist SFStreetsblog, didn't file charges against Ang until Thursday, November 10, the day after he officially won his re-election bid.  The official reason for the delay was that the city's Medical Examiner hadn't completed a report until three and a quarter months afterward.  City government is dysfunctional enough for that to be true, but in the words of the Church Lady, "How conveeenient."

Ang at first pleaded "Not guilty," but eventually agreed to plead guilty to misdemeanor vehicular manslaughter.  He was sentenced to three years probation, 500 hours of community service, and no jail time.  Ang was spared incarceration partly due to the mercy shown to him by powerful D.C. attorney Colburn "Coke" Cherney, Dionette's widower.

On August 11, 2011, Mrs. Cherney passed away. This is what I posted in the comments section of the San Francisco Chronicle that day about the arrogance, the pack mentality, and the callousness of Bay Area bicyclists (emphasis mine):

Over the decade or so I've worked in downtown S.F., I've known this sort of thing was inevitable.

While it would be hyperbole to compare them to the rampaging punks in London, those of us who were unlucky enough to be pedestrians (or "motorists") in the early days of Critical Mass have seen the erosion of the "Share The Road" mentality that the S.F. Bike Coalition putatively championed when it went "legit" vs. the "I'm Saving The Planet From Global Warming & And I'm Better Than You Are, Thus I Don't Need To Follow The Law" attitude that currently prevails.

What got us here? What always screws up California in general, and San Francisco in particular: Pandering to a pack of punks. Y'all will jam Market St. and bridge on-ramps if you don't get the bike lanes you demand? Fine, bike lanes, sprayed on the street. Then, bike racks on Muni vehicles. Then, green bike lanes with plastic barriers.

Good enough? Of course not. You're powerful. You're *special.* Nobody tells you guys what to do anymore, you tell them. So now, you go the wrong way down one-way streets or on the wrong side of the road. Where there are a half-dozen of you riding at a time, you practically dare drivers to take their legal place on the street -- you have the right-of-way granted by your moral superiority. You don't want to break your precious stride for stop signs or red lights, so you'll just charge thru intersections and barely miss unsuspecting pedestrians, or you'll zip onto sidewalks or into crosswalks, abusing the wheelchair ramps.

In Los Angeles, the board of Stupidvisors approved a measure that adds enhancements on charges against drivers who harass or assault someone because they are on a bicycle. In effect, in L.A. County, you potentially could be charged with a hate crime against a bicyclist. That's so stupid, I'm surprised S.F. didn't think of it first, and felt like it was inevitably going to be copycatted here. Maybe now that we've seen the deadly results of giving pedal-pushing punks too much power, the pols will have the courage to put on the brakes, which too many of you don't like to use.

Think I was being too harsh? Think perhaps I was generalizing too much?  Painting with too broad a brush? Save it.  Dodge bicycle riders on the sidewalks of San Francisco in my shoes before judging me.  Anyway, I have nothing to prove, because the newest incident bears out what I wrote last summer.

The latest victim is Sutchi "Terry" Hui, aged 71, from San Bruno.  He ran a travel agency in Chinatown for some thirty years.  He leaves behind his wife of forty years, who was walking alongside him at the time. The man who mowed him down -- allegedly -- is Chris Bucchere. Unlike Ang, who was not immediately identified and stayed mum publicly until his first day in court, Bucchere -- allegedly -- was sharing the incident with friends in his social networking world.  From an April 5, 2012 report from KPIX-TV:


Here is a selection of the most detailed account Bucchere allegedly provided, originally posted March 29th on -- and then deleted from -- the forum of San Francisco's Mission Cycling Club (h/t SFist):

Around 8 a.m. I was descending Divisadero Street southbound and about to cross Market Street. The light turned yellow as I was approaching the intersection, but I was already way too committed to stop. The light turned red as I was cruising through the middle of the intersection and then, almost instantly, the southern crosswalk on Market and Castro filled up with people coming from both directions. The intersection very long and the width of Castro Street at that point is very short, so, in a nutshell, blammo.

The quote/unquote 'scene of the crime' was that intersection right by the landmark Castro Theatre - it leads from a really busy MUNI station to that little plaza where The Naked Guy always hangs out. It was commuter hour and it was crowded as all getup. I couldn't see a line through the crowd and I couldn't stop, so I laid it down and just plowed through the crowded crosswalk in the least-populated place I could find.

I don't remember the next five minutes but when I came to, I was in a neck brace being loaded into an ambulance. I remember seeing a RIVER of blood on the asphalt, but it wasn't mine. Apparently I hit a 71-year-old male pedestrian and he ended up in the ICU with pretty serious head injuries. I really hope he ends up OK."

In the end, Bucchere says his bike was confiscated by the cops. Although he expressed some well wishes for the elderly victim who was expected to survive at the time but later died, Bucchere ended his note with an ode to his headgear, writing: "In closing, I want to dedicate this story to my late helmet. She died in heroic fashion today as my head slammed into the tarmac... The moral of this little story is: WYFH." Or, in other words: Wear your f**king helmet — a sentiment other commenters doubted, responding: "I'm not sure that's the moral of the story."


What IS the moral of the story, then?  Let's go back to the sentencing of Randolph Ang, attended by Didi Cherney's loving husband, Coke.  According to Gascon's office, Mr. Cherney's courtroom statement included this:


Our loss is done. [But] this city has a real problem.  Unless people start obeying the law or it gets enforced, more people are going to have to go through this."

You hear that, Mr. D.A.?  You don't want to go into your next re-election campaign with an army of widowers, widows, and photographs of chalk outlines in crosswalks, do you?  If so, maybe Mr. Cherney -- one of the best lawyers in America -- would be motivated to help find someone in San Francisco who isn't afraid of pedal-pushing punks, and could actually get your job done.
Posted by L.N. Smithee at 4/06/2012 06:38:00 PM 2 comments: