To the surprise of nobody who is paying attention, tonight actress/writer Tina Fey won a 2009 Primetime Emmy Award (Outstanding Guest Actress in a Comedy Series) for her portrayal on Saturday Night Live of her doppelganger, former Alaska Governor and GOP Vice Presidential candidate Sarah Palin.

IMHO, Fey's victory was a foregone conclusion before the nominations were even released. While her performance was skillful and spirited, the key component of its impact was not Fey's talent, it was the fact that her demeaning lampoon of Governor Palin crossed over from the entertainment world into the nightly newscasts. Fey's turns as a clueless caricature of Palin -- aided greatly by the uncanny physical resemblance between the two -- largely became the commonly-repeated narrative among the general public still learning about Palin, taking the place of Palin's rapid and unlikely rise from PTA volunteer to Mayor of Wasilla, AK, to Alaska Oil & Gas Conservation Commissioner to Governor of America's largest state.
An illustration of how Fey's negative Palin impersonation overtook reality can be seen in the 2009 documentary Media Malpractice: How Obama Got Elected and Palin Was Targeted, produced by radio talkhost John Ziegler. What became that film began with Ziegler setting up a camera up outside a polling place on Election Day 2008. He invited people who had just finished voting for the Obama/Biden ticket questions a reasonably well-informed citizen would know. The topics: The balance of power in Washington, the leadership and power-brokers of the political parties, and historical information about the candidates for President and Vice President. Ziegler also asked where they got the bulk of their news.

This is the result.

To counter accusations from a chorus of leftist bloggers that he had cherry-picked the responses seen in his video, Ziegler commissioned a third party --respected poll organization Zogby International -- to determine how informed Obama voters actually were.
The results were shocking. From the Zogby site, published November 18, 2008:

Obama voters did not fare [] well overall when asked to answer questions about statements or stories associated with Obama or Biden -- 83% failed to correctly answer that Obama had won his first election by getting all of his opponents removed from the ballot, and 88% did not correctly associate Obama with his statement that his energy policies would likely bankrupt the coal industry. Most (56%) were also not able to correctly answer that Obama started his political career at the home of two former members of the Weather Underground. 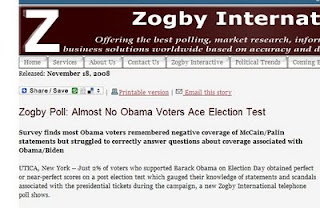 It's already legendary how the mainstream media cast aside its cynicism and investigative instinct and openly cheered for a historic Obama victory, and that's reflected in the ignorance about chinks in Shining Knight Obama's armor. When it came to questions about Palin, the story was different. The overwhelming majority of folks surveyed knew all the negative stuff about her.

Even negative stuff that wasn't true.

As I noted in my previous blog entry inspired by David Letterman's disgusting remarks about Palin's daughter(s), it would be an understatement to say that Barack Obama has gotten an a free pass from serious, stinging satire. Saturday Night Live's writers are no different from their gag-writing brethren in their eggshell walk through Barack Obama's candidacy and Presidency. Even as BHO's approval rating sank to below 50% in some polls recently, almost no TV comedy shows can bear to treat him as they did George W. Bush when his numbers took a similar downturn. But according to the Zogby results, Fey's Palin did more than make viewers laugh; it made (ahem) underinformed people think -- knowingly or not -- they were being seriously instructed about Palin's true nature.

This was not lost on some anti-Palin people. Once again, ABC Sports reporter Suzy Shuster's open letter to Tina Fey in her column at the Huffington Post, published September 23, 2008:

[...] From the Friday before the skit on SNL aired to the following Tuesday, Palin’s approval rating dropped ten points. Coincidence? I think not. After all, people in this country are tending to be more influenced by who or what they see on entertainment television, more so than on broadcast news or in print. Americans tune into Jon Stewart for their political appetites more than ever (and why not). So when you, Ms. Fey, don your Palin wig, you influence millions of voters more than Charles (”Charlie”) Gibson or Brian Williams, Paul Begala or that anorexic blond McCain spokeswoman ever could.

And I think its your responsibility to do so, or else we face the consequence of a woman in the White House who would strive to take away your daughter Alice’s right to choose along with every other woman’s in this country.

Most of us who read the Post are already scared out of our wits of what this woman could “accomplish,” should she reach the Vice Presidency or beyond. Abortion outlawed even in the case of incest or rape. Global warming research dismissed. Polar bears left unprotected, not to mention moose murder celebrated.

But you, Ms. Fey, have the ability, with just a wink and a smirk, to change the minds of millions of casual viewers and even more casual voters, to educate them.

[...M]any swing-state voters get their information and cue from you, Ms. Fey, and you need to provide as much of it as one woman possibly can, before the election is upon us and it is too late.

Comedy can cure and comedy can enlighten, but it must be a constant to reach enough ears to change the hearts and minds of this country, Ms. Fey, and not a minute more can afford to be wasted. So smear on your lipstick, get that slightly crazy look on your face, sharpen your No. 2 shotgun and get to work…

That's what made Fey a shoo-in from the moment she stood alongside Amy Poehler doing her impressive Hillary impression: It was a cathartic moment for Hollywood's overwhelmingly leftist creative community, the people who do the voting for the Emmy Awards. Most of you don't need a Weatherman to know which way the wind blows when it comes to politics in La-La Land (or, for that matter, "Live from New York!"): Among the glitteratti, Republicans aren't popular at all.

But if you are in need more evidence of that fact, consider what happened in January 2009 at the last Golden Globe Awards ceremony, when there was an award (Best Performance by an Actress in a Supporting Role in a Series, Mini-Series or Motion Picture Made for Television) given to different actress for her insulting portrayal of another conservative woman slimed by the left as a menace to society. I'm talking, of course, about former GOP Congresswoman Katherine Harris, who was the Secretary of State of Florida in 2000.

It was SoS Harris that stood up for the rule of Florida law against Democrat Party demands that she refuse to certify the pivotal Florida victory of GWB over Al Gore. Saturday Night Live had a lot of fun trashing Harris at the time, but that was nothing compared to the outrageous whacking she took from scenery chewing hack-tress Laura Dern in HBO's Recount, a laughably partisan imagination of the dramatic days between Election Night 2000 up to the Bush vs. Gore Supreme Court decision that affirmed Bush had been legally elected President.

Here's a representative sample of Dern's shameful mocking of Harris:

Now, witness the towering intellect of Ms. Dern on display in the post-ceremony photo session and press conference, in which she gladly received two questions demeaning Governor Palin (and gushed like a schoolgirl about the "real" Michelle Obama):


In the interest of full disclosure, I must note that defying my bold prediction, the Emmy voters for the 2008 season did not award Laura Dern the Outstanding Supporting Actress in a Miniseries or Movie trophy. The winner was Dame Eileen Atkins (who?) for Cranford, a BBC production (I never heard of it either). However, Recount director Jay Roach -- who replaced Academy Award-winning filmmaker Sydney Pollack (Out of Africa, Tootsie, etc.) when the latter took ill with the case of stomach cancer that would take his life -- won a shocking victory over odds-on favorite Tom Hooper, director of the blockbuster miniseries John Adams.

Pollack died the morning after Recount made its May 25, 2008 debut on HBO. But for all its firepower with its all-star cast (Kevin Spacey, Tom Wilkinson, Bob Balaban, Ed Begley Jr., Denis Leary, John Hurt, and Dern), the viewing public didn't give a rat-tail comb seven and a half years later. Recount drew approximately one million viewers that night, a woeful showing for an HBO movie promoted as heavily as it was. It's likely more people watched The O'Reilly Factor. America at large has long gotten over Florida. Hollywoodniks still haven't, and have shown no sign they will any time soon.

BTW, don't be too surprised if Tina Fey takes more golden statuettes home. She's up for her own sitcom 30 Rock for acting, writing and producing an Outstanding Comedy Series nominee. As was proved by the slathering of undeserved glory given the Dixie Chicks at the Grammys in 2007, the Show-cialists aren't above valuing politics over performance.

P.S.: In my previous post quoting Ms. Shuster, I called her "proudly ill-informed." What else could one say about someone who notes the significant percentage of the American public that gets its news from Jon Stewart by saying "why not?" Apparently, such a responsible approach to newsgathering has led Suzy to believe there is a basis for her suggestion that President Palin could somehow have "outlawed" abortion. In reality, no President has the power to do such a thing. Shuster's hysterical charge (can I say that?) is reminiscent of Cameron Diaz's 2004 plea to female Oprah viewers to vote (Democrat) if they didn't want to see rape become legal.

If Shuster knew a maddog thing about Roe vs. Wade, she would know that abortion was not outlawed throughout the nation before that fateful day in 1973 and would not be in the event that Roe was overturned. On the other hand, perhaps Ms. Shuster is fully aware of that fact, and just intended to scare the living daylights out of her libertine friends who mistakenly think the legal right to abortion infanticide of the pre-cute could end with a stroke of a pen or a single slam of a gavel.

About the celebration of "moose murder" and "polar bears left unprotected," only Shuster herself knows what the devil she's blathering on about. And they call Palin crazy!
.
Posted by L.N. Smithee at 9/12/2009 09:26:00 PM No comments: