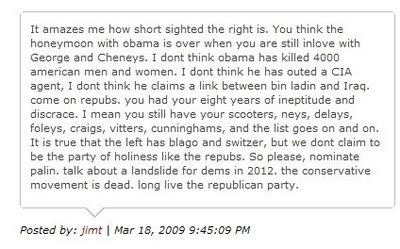 Setting aside for the moment your inaccurate cut-and-paste Daily POS bull-oney about Valerie Plame and the Iraq War: You forgot a couple of Dems, Jim. Just a couple.

Let's see ... there's Chris "Friend of Angelo Mozilo" Dodd who is solely responsible for the AIG bonuses, as he has confirmed today [March 18] after lying about it yesterday [March 17]. But if he told the truth yesterday, it would have denied Dems a high-tech lynching of the B-HO Admin's hand-picked AIG CEO today. It also would have taken the wind out of Barry Teleprompter's attempt to 'channel the anger' of the country against private business instead of his own party.

There's Maxine "this Democrat will be about nationalizing oil companies" Waters, who had a hot flash in front of the world demanding answers of CEOs who received bailouts without disclosing she engineered a bailout for her hubby's bank. She enlisted Bawney Fwank in doing that, who is so maddog smart he didn't know his bf was running a whorehouse out of his townhouse and who was LITERALLY sleeping with one of the guys who helped put Fannie Mae on the path to self-destruction. (Now the rest of us know how it feels to get screwed by Frank too).

There's Harry Reid, who announced that the surge would fail and the Iraq War was lost to take attention off of his shady land deals, and doesn't have the integrity to admit that he was wrong. There's John Murtha, who flashes his veteran credentials often, but who called the 43rd POTUS (an Air National Guard pilot) a "chickenhawk" but didn't say the same of the 42nd, who actually was a draft dodger. Murtha convicted Iraq soldiers of "cold blooded murder" in the media before they saw the inside of a courtroom, and hasn't had the decency to apologize when they were ALL acquitted. 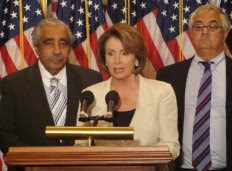 Then there's William "Cold Cash" Jefferson, who commandeered a Katrina rescue vehicle so he could retrieve 99K in bribe money out of his flooded house while others were waiting for fresh water and food (and cried racism when the feds found it in his freezer). High-living Ways & Means Chair Charles Rangel broke several laws and rules regarding his vacation home and his home office, and claimed that his constituents took pride in his expensive car taxpayers pay for (all of which -- unlike AIG bonuses -- he thinks isn't any of our "goddamned business").


And on a personal note, there's Nancy Pelosi. As I am a San Francisco resident she's "my" congressperson (gag). Everything you haters mistakenly think of Sarah Palin is the reality of Nancy Pelosi. The woman hadn't done diddly-squat for America for a decade until suddenly she was voted Minority Leader on the strength of her vise-grip hold on her district -- that, and her genitalia. She's an empty pantsuit with no skills other than fundraising and strong-arming, and no record of accomplishment that had nothing to do with being Democrat Party royalty by birth. Should the unthinkable occur to Obama and Biden, that blithering idiot will be Leader of the Free World.

Is Palin any better? You bet giraffe. Rising from nothing, after promising to clean up corruption in Alaska, she *actually* cleaned up corruption in Alaska, even among her fellow Republicans. Pelosi promised to clean up "the Republican culture of corruption," and then refused to take swift action against the aforementioned Jefferson (who finally lost his seat to an Asian Republican) and dragged her feet on investigating Rangel's inexcusable behavior.
If Pelosi was a Republican, some of the dumb stuff she has said ("I don’t know what was so 'Great' about the [Great] Depression, but that’s the name they give it") would have made her a national laughingstock long ago -- as she should be.


Similarly, Barack Obama has made gaffes and missteps and fall-down funny foul-ups, but he's protected by the entertainment and comedy community. This is not disputable: Never before in the history of show business (as we now know it) has the President been treated as untouchable for serious, biting satire. If you know your facts about totalitarian regimes, you know that's NOT a positive development in a free society.

So, yeah, Jim, you forgot a few (it's a partial list, done from memory). But it's not like the roster of honor-deprived, incompetent Dems would matter to you. As you said, "[W]e dont claim to be the party of holiness like the repubs." That's right. When you stand for nothing, when you have no hard-and-fast principles, nobody can ever call you a hypocrite.

You Had Your Chance, Yunji...

Open Letter to ABC News' Yunji De Nies: Here's Your Chance Not To Be a Hack 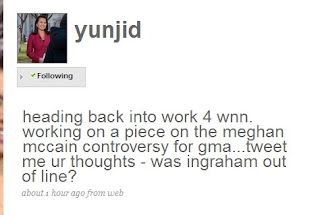 At about 7:00 pm the night of Monday, March 16, ABC reporter and World News Now co-anchor Yunji De Nies (or, as I should say since this is an open letter, you) sent the following message via Twitter (with explanations of tweet-imposed shorthand in parentheses for novices) :

"heading back into work 4 wnn (World News Now). working on a piece on the meghan mccain controversy for gma (Good Morning America) ... tweet me ur thoughts - was ingraham out of line?

"Was Ingraham out of line?" is the ONLY question that you thought to ask. As recovering litigator Ingraham might say: Leading the witness, your honor! Sounds like you only want one kind of answer. Where is the question of whether Meghan was out of line when she wrote of Ann Coulter, "Maybe her popularity stems from the fact that watching her is sometimes like watching a train wreck"?


Hopefully, Yunji, you won't fall victim to the freewheeling, biased culture of World News Now, which brought us this outrage on the subject of Coulter back on June 28, 2007, when then co-anchor Tania Hernandez suggested to deskmate Ryan Owens that Coulter and Paris Hilton engage in a "skinny death match." That statement of disdain for Coulter and Hilton -- with unsolicited commentary on womens' bodies to boot -- took place as the unknown WNN director called for the playing of Elton John's "The Bitch is Back".


If you missed that, and doubt it's how I describe it, don't worry, I can back it up. Here it is now:

You know that was no accident. But you have a chance to redeem World News Now and ABC News simply by being honest.


If you are more honest than the reporters who selectively edited Rush Limbaugh's multiple detailed explanations of the reasons why he 'wants Barack Obama to fail', you'll click here and listen to the ENTIRE part of Laura's show dealing with Meghan -- in context.


If you are an honest person, you will note that in Ingraham's stream-of-consciousness reaction to bytes from Ms. McCain's shallow interview with leftist MSNBC talkhost Rachel Maddow, she described Meghan as "kinda cute" before she referred to her as a "plus-sized model." Maybe in the looks-obsessed culture of TV news, being referred to as a "plus-sized model" is an insult. As a flamboyant heterosexual male who adores both the female form and the wondrous minds often contained within, I don't agree -- and I am on record as saying so.


If you are an honest person, you will review what Meghan has written about Ingraham's snide remark, and come to the realization Ms. McCain has completely transformed Laura's words into something completely different. To wit: In her turn on The View yesterday, Ms. McCain suggested -- without contradiction from the hosts, who were disinterested in the full picture, that Laura Ingraham meant to say 'She's fat, she's shouldn't have an opinion.'"


As a regular Ingraham listener, I understand what Laura meant: She was not making fun of Meghan's weight, she was making fun of her "valley girl" manner of talking, which is associated with shallowness. Ingraham's reference to The Real World was suggestive that Meghan wanted desperately to remain in the media spotlight, but wouldn't be cast on that show since the only women who make it onto that show are the hard-bodied, scantily-clad types.


Now, for some honesty of my own: As a big Laura fan, I don't think it was a fair attack, and don't think it was funny. Getting on Meghan for her voice and speech pattern rather than the content of her argument is no better than the way Sarah Palin critics (look around, Yunji, they're all around you on the set) unfairly suggested she was an airhead because of her Alaska accent and dropped "g's." I said as much as I could in the space of a tweet to Meghan:

@McCainBlogette Although I am big
Laura I. fan, I've researched situation,
and Laura was out of line. That being
said, you need thicker skin
But once again Yunji, you have the golden chance to show the journalistic power of honesty in reporting. You can show you are a cut above the common MSM hack, and thus prove that you don't use your precious, powerful perch as The Face of The News to twist the truth to settle scores, act as an unpaid political aide, or gratuitously steer public opinion against someone you don't like for petty reasons.

I know it's late, but you still have time to reverse the tone of any outrageous copy you've already written. You can do it!

I'll be watching (well, actually, taping). And you can bet I will let you know what I think either way. C U on Twitter.