From the document "Conway to Cook Interstate 5 Master Plan," published by the Washington State Department of Transporation in November 2008 (page 3-6) 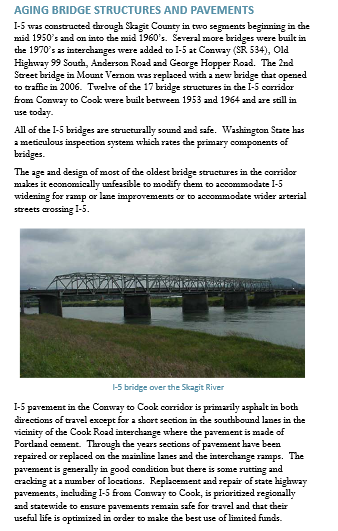 I-5 was constructed through Skagit County in two segments beginning in the mid 1950’s and on into the mid 1960’s.Several more bridges were built in the 1970’s as interchanges were added to I-5 at Conway (SR 534), Old Highway 99 South, Anderson Road and George Hopper Road. The 2nd Street bridge in Mount Vernon was replaced with a new bridge that opened to traffic in 2006. Twelve of the 17 bridge structures in the I-5 corridor from Conway to Cook were built between 1953 and 1964 and are still in use today. All of the I-5 bridges are structurally sound and safe. Washington State has a meticulous inspection system which rates the primary components of bridges. The age and design of most of the oldest bridge structures in the corridor makes it economically unfeasible to modify them to accommodate I-5 widening for ramp or lane improvements or to accommodate wider arterial streets crossing I-5.
I-5 pavement in the Conway to Cook corridor is primarily asphalt in both directions of travel except for a short section in the southbound lanes in the vicinity of the Cook Road interchange where the pavement is made of Portland cement. Through the years sections of pavement have been repaired or replaced on the mainline lanes and the interchange ramps. The pavement is generally in good condition but there is some rutting and cracking at a number of locations. Replacement and repair of state highway pavements, including I-5 from Conway to Cook, is prioritized regionally and statewide to ensure pavements remain safe for travel and that their useful life is optimized in order to make the best use of limited funds.