MASTERS' BLAST AT TIGER WOODS IS OUT OF BOUNDS

On Wednesday, April 7, 2010, Augusta National Golf Club chairman Billy Payne socked it to Tiger Woods the night before his return to professional golf.  Woods today ended his self-imposed hiatus to participate in the Augusta National's Masters tournament, and Payne let it be known that he is disappointed in Tiger (although I don't recall anybody saying they were really interested in knowing how he feels).  Here's video from Golf Channel coverage of the statement, via YouTube: 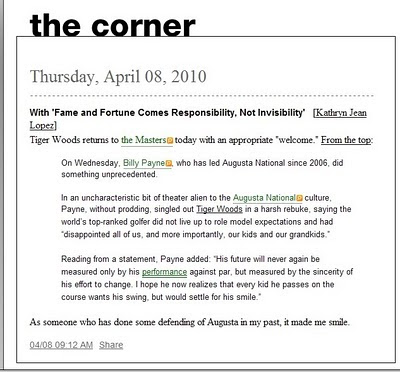 Here's what I emailed K-Lo in response:

You wrote of Billy Payne's slap at Tiger Woods: "As someone who has done some defending of Augusta in my past, it made me smile."  That's very interesting to me.  Why were you pleased by Payne's "appropriate welcome," as you put it?  Would you like to see such media statements to follow Woods all over the PGA tour?  Is it your opinion that Payne said something new that had not been said in at least a million different ways?


And exactly who is Billy Payne to make such remarks?  (I mean it -- who IS he?  I never heard of him!)  Is he now setting himself up as moral arbiter not only of the game of golf, but of its players as well?  Are we to believe that Tiger is the first man to tee off at Augusta that has cheated on his wife multiple times?   If Payne was so wounded by learning the truth about Tiger that he had to tell the world all about it, why didn't he just tell Tiger he wasn't welcome there any more?


I am no defender of Tiger's lifestyle, but his troubles are all personal, and only tangentially related to the game of golf.  If he had been found to have used performance enhancing drugs, that would have been a different matter altogether, and one in which Payne's opinion would be relevant.  As it stands, it just seems Payne felt the need to focus a spotlight on himself so that the people around the world who don't dig Tiger any longer can hear him say "Me too!"

I have not received a response from Ms. Lopez, whom I agree with much of the time.  I don't expect to get a note in return, as she probably is deluged with mail on many other issues of more lasting import.   But Payne ticked me off so much I had to say something about it.
Posted by L.N. Smithee at 4/08/2010 12:11:00 PM No comments: