RONALD REAGAN WAS A GREAT PRESIDENT. HE IS NOT GOD. DON'T TREAT HIM AS IF HE IS.

The following is my reaction to a story written by Jamie Weinstein of The Daily Caller, the right-leaning news site founded by conservative pundit Tucker Carlson.

Oh, noes!  What did Santorum say? Did he call Reagan "a useful idiot"?  Did he say that Reagan was an "amiable dunce"?  Did he launch into a television appearance by calling Reagan "an airhead"? 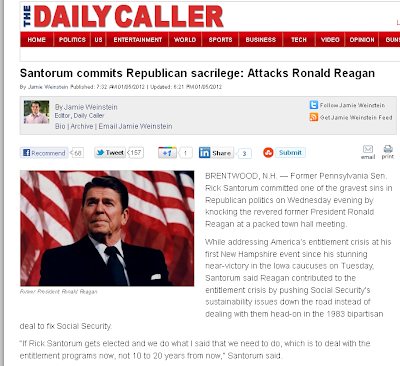 
“If Rick Santorum gets elected and we do what I said that we need to do, which is to deal with the entitlement programs now, not 10 to 20 years from now,” Santorum said.

“You’ll know — unlike Ronald Reagan who maybe was a better politician than me — you’ll know that it was Rick Santorum that worked together and got the American public to gather together to fix this problem. Why? Because it is our problem.”

Santorum was walking the audience through what he called the “ancient days of yesteryear” in a interminable and incredibly detailed response to a questioner. He explained that in the 1983 deal Reagan brokered with Democratic Speaker of the House Tip O’Neil to fix Social Security, the retirement age was moved back to 67, but that change wasn’t slated to be enacted until the politicians responsible were out of office.

“This was the brilliance of the politicians that did this,” Santorum said sarcastically.

“They were absolutely brilliant. They passed a bill that didn’t take effect for 20 years so nobody blames them. It was brilliant. They increased the Social Security age by two years back in 1983 and it didn’t start phasing in, it doesn’t fully phase in for almost 40 years. And so Ronald Reagan did that. Most people have no idea — no one associates Ronald Reagan with raising the retirement age. Why? Because all of the people it affected were nowhere near retirement and they didn’t know about it.”

The irritating third-person talk aside, is there anything improper about what Santorum said?  Absolutely not.  Social Security is a sacred cow entitlement that was fatally flawed from its very inception.  People have lived their entire lives thinking that it is the recouping of what the government has set aside for their retirement.  It is not.  People are under the impression that there is a bank account somewhere in Washington, D.C. from which all Social Security payments are issued.  There is no such place.  And the last six Presidents have each had to take emergency measures to "fix" Social Security.  They haven't -- all their fixes were temporary Band-Aid kick-the-can solutions.

Is Santorum's "fix" idea any better than the rest of them?  I honestly don't know.  But criticizing what we already know didn't work is certainly no "sin," Jamie Weinstein.

Here's what I posted in the comment section of this article:


Good lord, people, get a freaking grip.
I was born in the early sixties.  Ronald Reagan was the Governor of California when I first became aware of the existence of government.  My parents didn't like him at all, and said that he was probably a racist (we're black).  I bought the nonsense about him that he was a "warmonger" when he vied for the GOP nomination in 1976. I vividly remember a commercial for Gerald Ford's campaign that said, "Governor Reagan can't start a nuclear war. President Reagan can."
By the time he laid waste to all Republican opponents in the 1980 campaign, I was convinced by the MSM portrayal of him that he was a megalomaniacal Hollywood has-been who failed at being a poor man's John Wayne, and figured being President would be bigger than any role he may not have gotten.  When he won, I and many of my peers thought an atomic conflagration was only months away.  When I graduated from high school, whenever plans for a ten-year reunion would be discussed, it was common to hear, "The world's gonna be blown up by then."
Needless to say, everything I had been taught to think about Ronald Reagan was dead wrong, and I didn't really realize it until after he had been termed out.  He was the driving force behind the end of the Cold War, having helped weaken the Soviet bloc to the point where it collapsed without a single missile leaving a U.S. silo.  In his wake, over thirty years later, there are still liberals who will never forgive Reagan for not blowing the
world to smithereens like they swore he would if they didn't stop him.
Ronald Wilson Reagan is the greatest U.S. President of my lifetime, and it's unlikely that will change (unfortunately).
Now...Does that mean he was perfect? Of course not. He wasn't. Whatever you think of the motivation behind Iran-Contra, that was a blunder that taints Reagan's legacy and might have cost the GOP the White House (it didn't -- George H.W. Bush won, largely because he was facing Michael "The Tank" Dukakis). The fact that Reagan granted amnesty to millions of illegal immigrants is used as a weapon to justify the drive by modern-day Democrats (and many Republicans) to expand on an action that they won't admit has failed.  Even when he was Governor of California, Reagan -- who endured a contentious divorce with actress Jane Wyman -- signed the trend-setting no-fault divorce bill.  It is my humble opinion that California's adoption of no-fault divorce damaged the institution (and thus, the nuclear family unit itself) more than any other single action.


In order [to make] the changes necessary to fix the broken entitlement systems, one needs to clearly state what led up to the mess it has become.  It seems to me that Rick Santorum decided if he was going to make a solid case, he couldn't dance around the fact that Reagan was one of the steady string of POTUSes who played a part in screwing the pooch.   Santorum shouldn't be intimidated into revering Reagan so much that he won't dare address fixing a problem that Reagan -- among many others -- left to future generations.
That having been said, at this point I don't think Santorum could beat Obama.  But what I like about Santorum is that more than any other remaining candidate, he says what needs to be said, damn the torpedoes.  In this time when the GOP establishment seeks out people who will do their best not to offend casual voters with short attention spans that unthinkingly swallow headlines, that ought to count for something.