I Got Your Media Bias Right Here! Part III; Does Krugman Read His Own Paper?

Under the recount process ordered by the Florida Supreme Court, both consortiums agree that Bush would have won. Under the “full” recount process that Krugman thinks “should have been,” one consortium gives the election to Bush under the more widely used standards, and the other consortium only finds that Gore “might” have “eked out” a victory.

Those are the facts. But will the Times run a correction, at least concerning Krugman’s blatant factual misrepresentations about the Miami Herald/USA Today consortium’s results? As of this writing, I’ve heard nothing in response to my query about it to “public editor” Byron Calame. I’m not holding my breath. There’s no way the New York Times is going to interrupt its most effective evangelist when he’s in the middle of a fire-and-brimstone sermon about the Angry Left’s cherished creation-myth.

I Got Your Media Bias Right Here! Part II:

Power Line: If the Facts Don't Fit, Make Them Up

In the previous thread, I described an Associated Press wire report as "surprisingly balanced." That's because a disturbing percentage of AP stories are like this dishonest and slanted missive from Angela Brown, which continues the pattern of omitting relavent facts that don't lead to a reporter's pre-conceived conclusion, and adding false context to factual events.
Posted by L.N. Smithee at 8/25/2005 10:00:00 AM No comments:

I Got Your Media Bias Right Here! Part I

A surprisingly balanced AP story is marred by the San Francisco Chronicle's slanted link on its homepage. Click the pic at right for a closer look.
Posted by L.N. Smithee at 8/24/2005 12:19:00 AM No comments:

"Protect?" Somebody Help Me With This...

Read this article, and explain to me the word "protects" in this headline. It seems to me this case is not about 'protecting kids' as much as it is about letting homosexuals know they can't be deadbeats any more than heterosexuals can be.

This is being heralded by local San Francisco media and this particular AP reporter as some sort of breakthrough for same-sex couples; in fact, if the law is going to allow homosexuals to create children from artificial methods (which I disagree with but can't do anything about), this ruling is consistent with common sense.

Update: At the prodding of KNEW talk show host Jeff Katz, I have re-examined this story, and note that nowhere does it mention that the woman who gave birth to the disputed children had to receive sperm in order to fertilize the eggs donated to her by her partner.

For those uninformed about in-vitro fertilization -- most likely, children who are just beginning to cultivate interest in current events -- it is dishonest for this AP writer to pretend that a donated egg and a uterus can produce a child without fertilization from sperm.
Posted by L.N. Smithee at 8/23/2005 08:18:00 AM 1 comment:

Re: WashPost Backs Out on Freedom Walk | NewsBusters

I am not a fan of the Washed-up Post, believe me, but I have to say that they are exercising a bit of consistency in their about-face.

When I heard about the paper's pullout due to keeping "its appearance of neutrality," I figured that its publishers were practicing typical media monolith disingenuousness. I checked the website of the annual D.C. gay celebration --"Capital Pride," it's called -- and thought I would find the Post front and center among the sponsors. To my amazement, it was not.

I then embarked on a Google search using the phrase "sponsored by the Washington Post." The results were, again, surprising; indeed, the Post, true to its word, did not have a record of sponsoring events that some might point to as proof of bias one way or the other. Most of the links were to online chats or workshops or conferences "sponsored by the Washington Post." There were events the Post sponsored for minority and gay journalist groups, but the groups themselves were not demonstratively partisan in themselves.

But why was I amazed at the Post's forthrightness? Because I live in San Francisco, where the annual gay pride parade -- the largest event year in and year out -- is sponsored by, among other companies, the San Francisco Chronicle. In fact, the Chron even has at least one hot pink delivery van emblazoned with the slogan, "We Come Out Every Day." As Dave Barry says, "I am NOT making that up." Apparently, the Chron not only doesn't mind if you think it's biased, they think bias is their responsibility.

It just goes to show you when it comes to bias, there is bad (Post), and then there is worse (Chronicle). I guess this could be responsible for the air of superiority resulting in that line in the Watergate movie All The President's Men, when Hal Holbrook Jason Robards, playing Post editor Ben Bradlee, jokes with Woodward and Bernstein about 'selling old weather reports to the San Francisco Chronicle.'

Via Michelle Malkin, we have at last located a liberal (so she describes him, he's new to me) that didn't need to be led by a guide dog to the real issues behind Casey's Mother's Blarney & Wailing Circus.

Sheehan admits that she just wants to lay a question on Bush: Why did you kill my son?

Her accusatory tone suggests that she wants to flog the president with blame and vitriol and not have a meaningful, respectful dialogue.

At the very least, she gets her name all over the news as the mom who tried to stick it to Bush.

If Sheehan wants sober war policy answers, I have a one-word suggestion for her: Google.

She can read up on Bush's shifting justifications for the Iraq debacle. She won't get solid answers, but she will read a lot about a Bush administration that misrepresents facts and lies as a matter of habit.

She also will come across accounts of our "heartless" president crying with families of dead soldiers.

My thoughts drift to grieving parents of slain troops who have not even had a chance to meet with Bush...

Some of these families believe the war is wrong, too.

They just choose to deal with their feelings in a way that doesn't cheapen the memory of their loved ones or turn a grave matter into a media circus standoff that generates more heat than light.

Google Gurus Dish It Out, But...

Google Miffed at Getting 'Googled' by Reporter

Google says its mission is "to organize the world's information and make it universally accessible and useful." But it does not appear to take kindly to those who use its search engine to organize and publish information about its own executives.

CNETNews.com, a technology news Web site, said last week that Google (Nasdaq: GOOG) had told it that the company would not answer any questions from CNET's reporters until July 2006. The move came after CNET published an article last month that discussed how the Google search engine could uncover personal information and that raised questions about what information Google collects about its users.

"They were unhappy about the fact we used Schmidt's private information in our story," Singh said. "Our view is what we published was all public information, and we actually used their own product to find it."

He said Krane called back to say that Google would not speak to any reporter from CNET for a year.

Using Google, I found David Krane's blog. In his 8/4/05 post of a top five list of the ways his new daughter will be just like Google, I made this addition (reprinted verbatim):

Hey, Dave! I just got through reading about your conversation with the folks at C|Net, and I've got another one for ya!

6. (The baby will), realizing that everyone loves and adores it no matter what, will think nothing of crapping on people just because (she) can.

I just don't get Google's churlish response to this article. It's a perfectly & responsible article. All the information about Schmidt was publicly available using his own company's technology. These people really have to get a life. It's not like the reporter went dumpster diving or dredged up former lovers or wives who wanted to tell all about him.

If Schmidt wants to be as prickly and thin-skinned as Bill Gates, then he'll have to pay the price in earning the public's disdain for his arrogance.

One Finger Pointing at Me, Three Back at You: Then and Now 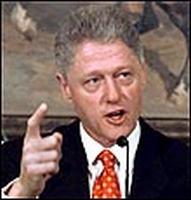