DID LADY GAGA RIP OFF HER EGG IDEA FROM THE SAN DIEGO CHICKEN? COMPARE THE VIDEOS!

If you watched the Grammy Awards on February 13th, you saw it: The heavily-promoted first live performance of the title track from Lady Gaga's upcoming CD, Born This Way. As I tweeted during the Grammycast, I don't remember a title cut so overhyped since @MCHammer's "2 Legit 2 Quit."

If you didn't see it, here it is, courtesy of CBS and Mediaite.com.

Here's a still image of the Gagster riding on to the Staples Center stage in a translucent egg, also from Mediaite.

Many have accused the singer/songwriter/musician formerly known as Stefani Joanne Angelina Germanotta (whew) of ripping off another flamboyant Italian-American singer, Madonna (nee Madonna Louise Ciccone).  But the idea of emerging from an egg onstage predated Gaga's emergence from wherever she came from in 1986. 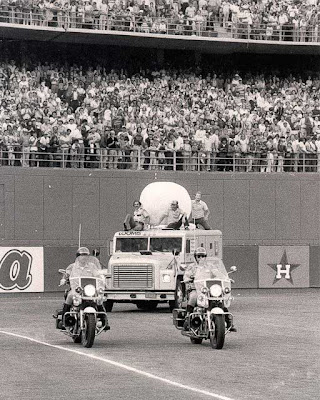 The above photo is from an evening of June 1979 in San Diego, CA at San Diego Stadium, home of Major League Baseball's San Diego Padres.  A police motorcade has brought in an armored car with a giant egg on top, flanked by four security guards.  Watching the entire spectacle is a crowd of over 47,000.  Inside the egg is perhaps the most famous costumed mascot in the history of professional sports, The San Diego Chicken (aka The Famous Chicken, formerly the KGB Chicken).  Inside the Chicken costume is Ted Giannoulas, who only five years before was a San Diego State student that agreed to wear a chicken outfit at an Easter Sunday promotion by a radio station. The pay rate: $2.00 per hour.

To make a long and nearly unbelievable (but true) story short(er), through appearances for KGB-FM at San Diego Stadium, Giannoulas became as big a draw to Padres games as the team itself, which rarely shined on the field.  He stole the show wherever he went, even causing rock legend Elvis Presley (on his final tour) to laugh so hard, he couldn't complete a song without commenting on the Chicken dancing along. Then the station unceremoniously dumped Ted, and put another guy -- who had none of Giannoulas' comedic capabilities -- in the suit that Ted made famous.  The station figured the KGB costume was what made the Chicken popular, not the person inside.  They were wrong.  Crowds not only didn't react to the new dude in the suit, at one point he was actually chased out of San Diego Stadium!  Giannoulas created his own costume to resume his passion, but KGB filed an injunction to prevent him from doing so. Ted sued KGB for the right to perform as the character he alone created, and won in California's Supreme Court.

Free as a bird to resume his unlikely career, Giannoulas plotted a grand re-entrance. Below is video of the KGB Chicken's rebirth as "The Famous Chicken" with commentary by Ted -- who I don't believe has been photographed out of his costume since the '70s -- in an interview with Red Door Interactive CEO Reid Carr.


(Unfortunately, the footage doesn't include the audio of The Chicken breaking through the styrofoam shell as the climax of Richard Strauss' "Also Sprach Zarathustra" [the theme from 2001: A Space Odyssey] plays over the PA system.)

Since then, Ted has traveled throughout the United States and the world as a uniquely American ambassador of slapstick fun. At 56, he's just beginning to slow down a bit, but he's had a career longer than most comedians and every one of the athletes on the field when he first started out. And it all began with a college kid taking a short gig for cash and the accidental discovery he had a natural gift for making large numbers of people laugh.

Oh, yeah, I almost forgot ... in answer to the question, "Did Lady Gaga rip off her egg idea from the San Diego Chicken?" the answer is definitely "no," presuming she came up with it on her own. But among outlandish performers who exited a giant egg wearing a yellow costume in front of thousands of people in a sports facility, Giannoulas beat Germanotta to the punch. It only makes sense that when it comes to eggs, The Chicken came first.