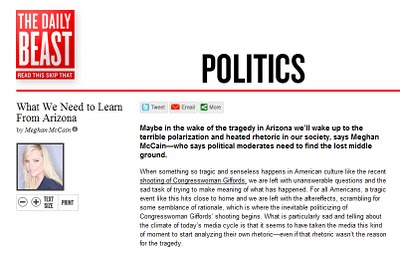 There's nothing wrong with "angry rhetoric." Nothing at all. If anything, it's a sign we live in a healthy, open democracy where people are passionate and outspoken. Nobody ever said democracies are supposed to be modeled after Victorian tea parties. Democracies by their very nature are confrontational, passionate, and even divisive.

Having said that, inciting people to violence is inexcusable. So is reckless language that could be interpreted as a incitement to violence. I'm talking to you Sarah Palin and Sharron Angle, et al. Sure, Jared Loughner's actions had nothing to do with you (it's already become clear he's schizophrenic and didn't even watch the news) ... but subtle and not-so-subtle encouragement of violence in the political arena should be viewed with alarm regardless. Putting up a cross-hairs map on a website with the message to "Reload" (then specifically listing Democrats who won in red states) is not responsible. Threatening to "resort to Second Amendment measures" is not responsible.

Imagine if a Muslim had put up a cross-hairs map on a website and listed specific Congressmen. Or if a Muslim made a public speech threatening to resort to Second Amendment Measures. Of if a Muslim told his flock, "I want you armed and dangerous" a la Michelle Bachman.

Anyhow, it's been an interesting week. Sarah Palin rightly claims she is being scapegoated for the actions of an extremist. In which case, maybe she should ask moderate Muslims for advice on how to deal with that. They should be able to relate to her predicament just fine.