LETTERMAN'S OFFICE SQUEEZE ISN'T FUNNY EITHER - To Dave, She's a Thriller; To Me, She's a Show-Killer (VIDEOS UPDATED!) 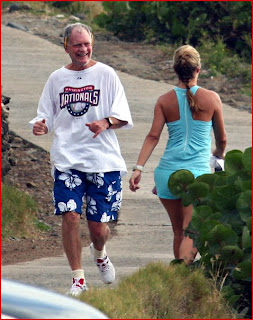 Details are emerging about David Letterman's sexcapades with women in his employ other than his acknowledged longtime girlfriend Regina Lasko, mother of his now five-year-old son Harry.

CBS News producer Robert J. "Joe" Halderman, the man who was arrested for allegedly attempting to extort $2,000,000 out of Letterman by threatening to write a screenplay detailing uncomfortable aspects of Dave's dalliances, is a former boyfriend of Stephanie Birkett, a former Letterman personal assistant. 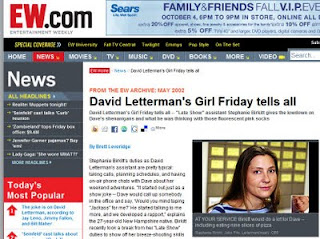 I have already gone on record as saying that after watching Letterman going back to my days working graveyard in the eighties, I gave up on him and his show after he became more focused on persecuting George W. Bush than being funny. As things deteriorated to that point, Late Show fans were introduced to Ms. Birkett in an unbelievably lame weekly segment called "Know Your Current Events." The premise: Members of the audience are selected to pretend they know the answer to unknowable questions on the index cards Dave has in his hand. In fact, the guests are simply reading (off camera) the punchlines Dave's writers have provided. Bringing prizes when the attendees correctly answered was Birkett, who would give her best shot at acting, failing miserably every time.

Here is a video of one of Birkett's appearances in "Current Events" circa 2005 via YouTube (It's subtitled by the YT user in Norwegian, or something):

Here's another example of Birkett's show-killing skills, as she re-enacts an embarrassing dance an old college boyfriend of hers used to do. This just cracks Dave up to no end, and he scuttles the planned gag ("Would You Like To [ahem] Eat a Sandwich In Dave's Office?") so viewers can be treated to Birkett and other Late Show regulars imitating her monkey-dancing ex ... again and again and again.

(NOTE: The original clip of this scene -- which ran over five minutes at least -- was deleted from YouTube due to a copyright claim by CBS. Below is a shorter video of the failed bit, still online as of June 3, 2011.)

On the right of the screen is Dr. Louis Aronne, whom Letterman credits with having saved his life by recognizing in him the hereditary heart condition that killed his father at an early age (Letterman has now lived longer than his father had). Within days, Dave had emergency bypass surgery, which sidelined him for weeks in 1999. It's only fitting that Birkett be alongside Dr. Aronne because she is about as funny as a heart attack.

It wasn't always like this with Letterman. Back in his NBC days, he pioneered the formula: Find non-professionals and/or crew members with no training as performers (at least, none discernible), give them the opportunity to make fools of themselves, and enjoy the results. Just thinking about the past work of Dave's stage manager Biff Henderson and associate director Pete "Who Gives a Rat's ..." Fatovich gives me the chuckles. Of course, the anti-superstar of Letterman's early years was the late Calvert DeForest (aka Larry "Bud" Melman), the bespectacled, elderly, pudgy drug counselor whose appearance in a short student film led to an acting career -- sort of -- in his twilight years.


Beating Letterman at his own game nowadays is Jimmy Kimmel, whose Jimmy Kimmel Live! show makes great use of the broken English of Guillermo Diaz, his lovably dorky Mexican parking lot attendant. Unlike many professional comedians nowadays (hello, Jay Leno), Guillermo is unafraid to go to great lengths for a laugh, always up for dressing in outlandish costumes or in drag.


But even Guillermo pales before Kimmel's real-life uncle, former NYPD officer Frank Potenza, who may be the unintentionally funniest man alive.


I am sure many who find Birkett uninspiring (to say the least) might be tempted to say something along the lines of "We know how she got to be on TV," and I can't argue that it's an unfair question. But the possibility that human Clinton-joke factory Letterman has a casting couch somewhere in the Ed Sullivan Theatre is not as big a deal to me as his apparent decision years ago that his personal satisfaction is more important than the quality of his product. In other words, Dave has shown contempt for his audience: I'll plop anything on a plate, call it "comedy," and you dummies will lap it up because it has my name on it.

It is that attitude has led to the rapid cooling-off of many a hot comedian (Jerry Lewis, Chevy Chase, Keenan Ivory Wayans, Jim Carrey, Robin Williams, etc.) It is yet to be seen if a sexy scandal (as opposed to a full-fledged Woody Allen-like sex scandal) can fell a funnyman in post-Polanski Hollywood.

P.S. For all the praise Dave has lavished on his glamorous female guests over the decades, it's seems that in real life, he tends to prefer his women (Merrill Markoe, Regina Lasko, Birkitt) to be on the plain side. FWIW.

While I agree Dave hasn't hit the mark since leaving NBC I think CBS had alot to do with it..they wanted a show closer to the tonight show/sanitary..still pisses me off that Dave gave Leno all that exposure on his showw and was back-stabbed 4 it..his affair with birkitt ended several years ago and while I know his joke about Palin went awry he did apologize sincerely..so I don't get why Fox news is after him like a lynch mob?Plain & simple he screwed up & will pay the price..it's none of OUR business..

I'm not sure what you mean by "Dave gave Leno all that exposure on his showw and was back-stabbed 4 it." They both wanted the Tonight Show gig, and neither should have had some expectation of the other backing down and clearing their path. Leno had the advantage of having proved his appeal to the Carson audience as regularly-scheduled guest host on Monday nights.

As you can tell by the NBC Late Night with David Letterman clips, Dave was an acquired taste back then, and reports indicated NBC thought he would alienate Carson fans with his weirdness. They chose Leno over Dave, and despite the critics' yawns, Leno wound up on top among viewers until he called it quits. It's hard to argue that NBC made the wrong choice.

As for "it's none of OUR business" -- none of the stuff like this is. But the reason why Dave is a superstar is because it's his job -- along with Jay, Conan, Kimmel, etc. to feed us ruminations of celebrity stuff that is "none of OUR business."