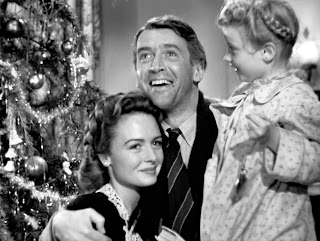 Originally, this was supposed to be a year-end post with "Best" and "Worst" of 2012.  But as the time was counting down on the "Fiscal Cliff," and America re-elected the worst President in my lifetime just because he is more "likable" than a man slimed more than Dr. Peter Venkman, I couldn't think of many "Best" things.  2012 sucked from beginning to end, I thought.

Then, I spent December 24th the way I have for many years now: Watching Frank Capra's masterpiece It's A Wonderful Life, which in my humble opinion is the closest any motion picture has ever come to perfection.  Not only because every line, every scene, every facial expression is exactly what it should be, but because of the way it makes you, the viewer, reflect on your own life.  It challenges you to think of the positive effect you have on others when you don't realize it, how others may not be aware of the positive effect they have on you, and how important it is that those feelings are expressed.  Every holiday season, there is without fail that someone you can point to and say, "_________ should have seen It's A Wonderful Life before s/he __________."  For example, it was during one year's IAWL broadcast that a news promo came on saying a woman had bailed out of a corporate jet without a parachute, plunging some 2,000 feet to her death.

It was while I was under the influence of "Capra Corn" that I decided to count my blessings and find some good things to remember about 2012. At first, it was just a short list.  Then more things came to mind.  And more people that I appreciated.  And more things they did that I was impressed with. And more jokes that made me laugh out loud.   And more audio and video that I wanted to share or introduce people to. And more times I wished I could have reached through the TV, the radio, and my computer screen and given someone a hug in appreciation.

Eventually, the list grew so long that it didn't make sense to put it all into one thread.  So I broke it into four, counting down the categories in which I found something good to look back on.  We start with The Earth, Commercials, and Brands/Business.

This one from the "It's Not Crazy, It's Sports" series shows the hazards of sharing a name with a sports legend.

And this one, showing that despite the intense rivalry leading them to baseless prejudice, Manchester soccer fans are really brothers from different mothers. After the near-murder of Giants fan Bryan Stow by drunken Dodgers fans in 2011, it's something to think about.


Then, they were inexplicably dumped by DirecTV in favor of spots starring a prickly married (?) couple bickering over DVR space, featuring an unlovable jerk of a husband/father who complains that he never gets to see his wife naked. Here's a tip: Stop being an unlovable jerk. Maybe that'll work.

In an uncharacteristically balanced interview on CNN (likely because host Soledad O'Brien was not anchoring that day), watch Chicago Alderman Proco Joe Moreno tap dancing around what he's demanding out of Chick-Fil-A before he supports an ordinance change to allow them to open on a tract in "his" ward.

Now, here's Boston Mayor Thomas Menino saying that his letter to Chick-Fil-A dis-inviting it to Boston (also sent to the land owner of the proposed new location)  doesn't carry any extra weight because he can't legally enforce his negativity:


I wrote this blog post about San Francisco Mayor Ed Lee and his fascistic warning to the Chick-Fil-A owners:

Chick-Fil-A's operators didn't back down, and the chain was rewarded for its courageous stand for its principles by the biggest single day in its history. Here's Fox News' Eric Bolling recapping Chick-Fil-A Appreciation Day with its originator, Mike Huckabee.

Coming up next: What Didn't Suck About Radio and Television in 2012!