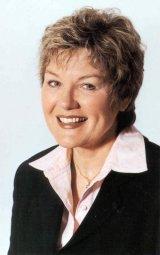 Word on the radio is that former TV anchorwoman and current radio talk show hostess Christine Craft (left), who won a sexual discrimination suit in 1983 against a Kansas City television station after her dismissal was linked to a research study that decided that Craft was "too old, too [ugly], and not deferential to men," has joined the far-left defenders of the radical, profane, repellent "critic" of everything American, Stephen Pearcy. As the story goes, at today's Move America Forward demonstration in Sacramento this afternoon protesting a taxpayer-supported art show's inclusion of -- among other works -- Pearcy's crude painting in which a representation of the Stars & Stripes is being flushed down a toilet, Craft has arranged for Air America Radio's counterdemonstration to include a drag queen to make fun of MAF co-chair Melanie Morgan (below right), a former ABC News reporter and current co-host at conservative talk standout KSFO in San Francisco, who just happens to be an attractive blonde woman. At least for the day, the transvestite will be re-named "Melony Morgan," which seems to imply that Ms. Morgan is a bimbo.

This wouldn't be out of character for Christine Craft. I have spoken with Craft one time. In 1997, when the Supreme Court finally rejected Bill Clinton's attempts to invoke Executive Privilege to prevent Paula Jones' sexual harassment suit from going forward while he was in office, Craft, who was filling in on the call-letter deficient station (aka KGO, San Francisco's powerhouse center-left talk station), said that Jones, in her opinion, was "an opportunist slut (sic)." I was driving up El Camino in Belmont toward S.F. at about 11pm, couldn't believe my ears, and got out of the car and called the show from a pay phone.

I told her, "I can't believe what I just heard! A feminist who won a high-profile sexual discrimination suit just called a woman who filed a high-profile sexual harassment suit 'a SLUT?'" She failed to grasp the irony, and didn't back down, even when I argued that there were more reasons to believe Paula Jones than Anita Hill in her claims of sexual harassment against Clarence Thomas, since there were audiotapes proving that Clinton rewarded Gennifer Flowers for "kissing it," which Jones refused to do.

She still doesn't understand the concept of irony, apparently -- otherwise, a woman who was fired from a TV job because of her looks wouldn't be sending a female impersonator to make fun of a woman who is better looking.

IMHO, another verdict has come in: being Christine Craft is kind of a drag.